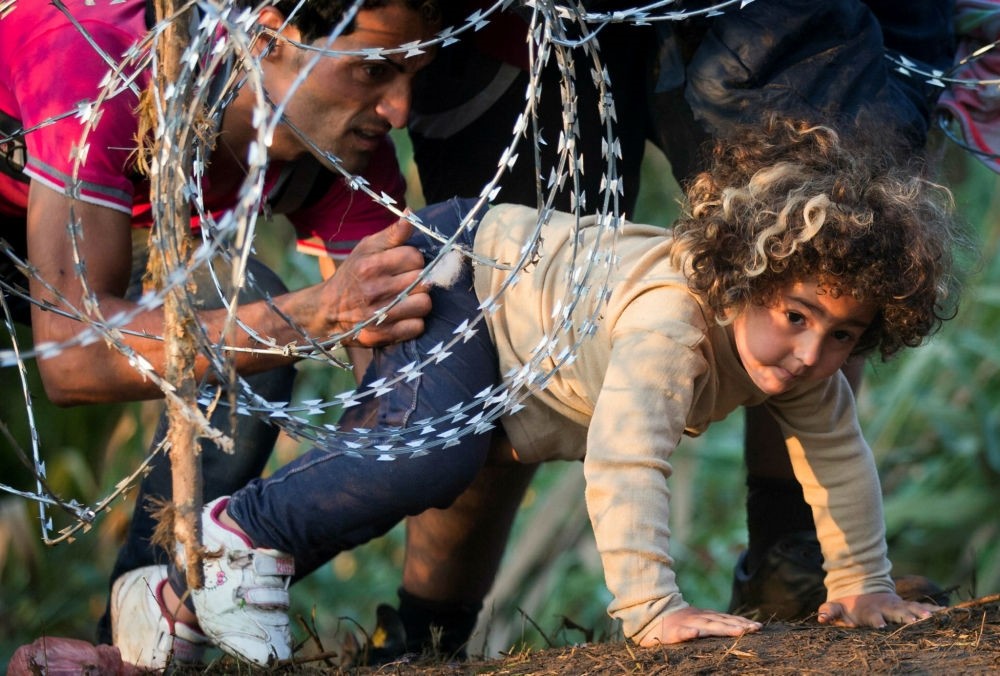 A refugee girl passes under razor wire as she crosses from Serbia to Hungary, in Roszke.
by Compiled from Wire Services Jun 13, 2017 12:00 am

The bloc's divisive migration disputes continue as the European Commission prepares to open legal cases against Poland, Hungary and the Czech Republic, which have long been opposed to sharing the burden of taking in refugees

After setting a June deadline for three Eastern Europe countries to start admitting their share of migrants from overstretched Italy and Greece, the European Union's executive starts probing legal cases against them today for failing to take in asylum-seekers to relieve states on the front lines of the bloc's migration crisis.

This would mark a sharp escalation of a dispute between Brussels and these states. Such letters are the first step in the so-called infringement procedures the Commission can open against EU states for failing to meet their legal obligations.

Under so-called EU "infringement proceedings," Brussels sends a letter to national governments to demand legal explanations over certain issues before possibly referring them to the European Court of Justice. EU states can eventually face stiff financial penalties if they fail to comply.

European Commission chief Jean-Claude Juncker and other EU officials have long expressed frustration with the slow pace of relocation of asylum seekers aimed at helping to tackle the worst European migration crisis since World War II. More than 1 million migrants entered Italy and Greece in 2015.

Eastern European countries like Hungary, Poland and the Czech Republic have opposed an EU plan adopted in 2015 to take in 160,000 Syrian, Eritrean and Iraq asylum seekers from Greece and Italy.

The bloc has fought two years of these bitter migration battles but the two southern states, backed by rich countries like Germany and Sweden that are the final destinations for many migrants arriving in the EU, have failed to force Warsaw and Budapest to change their policies.

The bloc's divisive migration disputes have come at a time its unity and resolve are already being tested by Brexit, weak economies and higher support for populist, eurosceptic and nationalist-minded parties on the continent.

It pits the formerly communist easterners against the wealthy westerners and countries on the Mediterranean coast, with Italy leading calls to punish Poland and Hungary by taking away some of the generous EU funds they benefit from.

The relocation agreement will run out in September. So far, fewer than 15,000 people have been transferred within the EU. EU members have until September to take in 160,000 refugees from Syria and elsewhere currently living in Greece and Italy, which have been on the frontline of the migration crisis. So far only 13,500 have been relocated in a laborious process that has been bogged down by resistance from central and eastern European states that oppose Muslim immigration. The EU launched the relocation scheme in September 2015 to deal with the biggest wave of refugees in its history, with more than 1.1 million arriving in 2015, most of them fleeing the conflict in Syria.