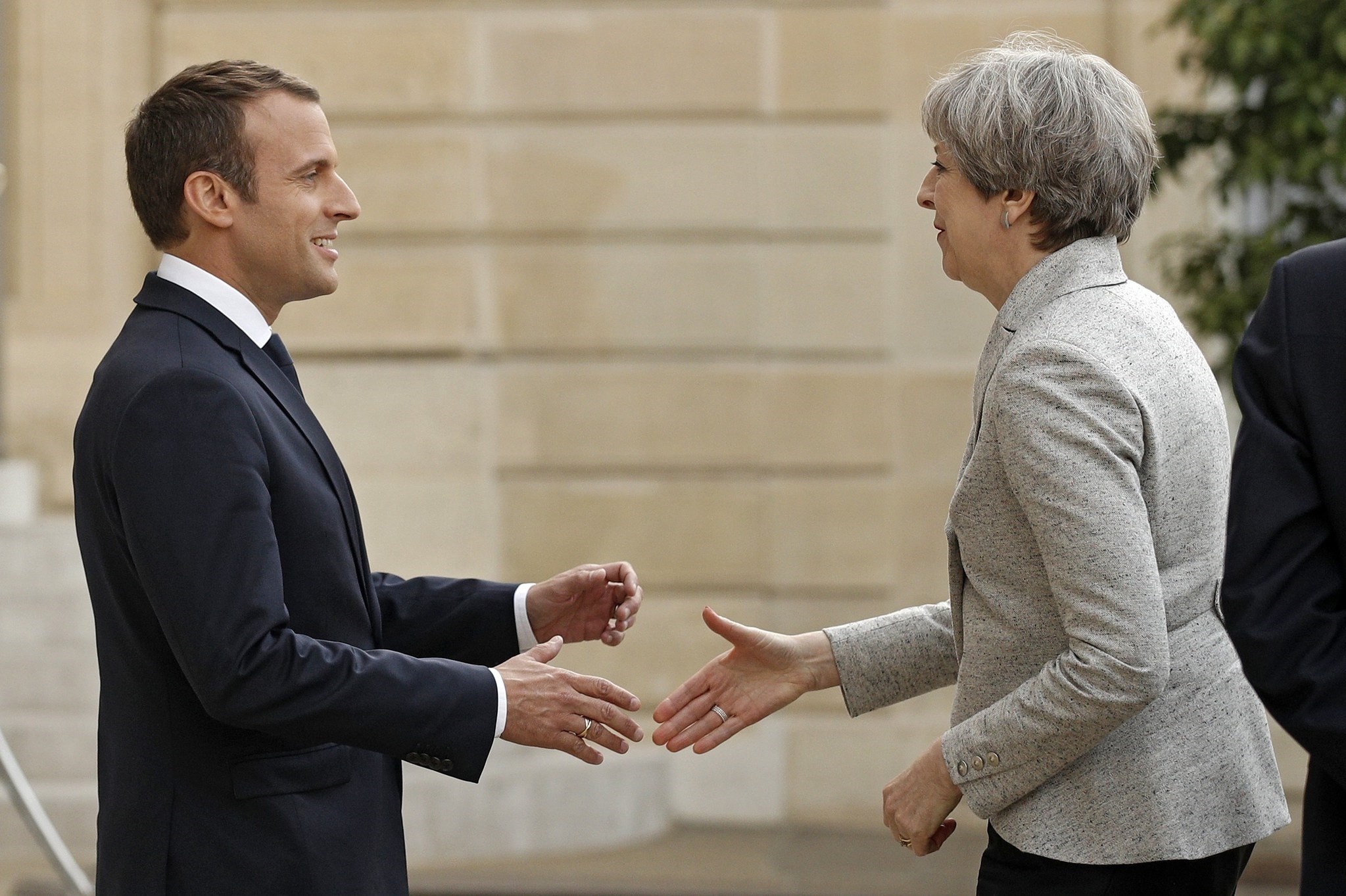 She wants to escape the European Union, he wants to embolden it. British Prime Minister Theresa May and French President Emmanuel Macron are holding talks from opposite sides of the Brexit front line.

British Prime Minister Theresa May said Tuesday that the timetable for Brexit remained "on course" and talks would begin next week.

Speaking at a press conference in Paris with French President Emmanuel Macron, May said that despite her ongoing negotiations to form a government "the timetable for the Brexit negotiations remains on course and will begin next week." British officials had suggested that they wouldn't be able to formally start Brexit negotiations next week as planned.

Meanwhile, French President Emmanuel Macron exuded more positivity, saying that the door is still open for the U.K. to remain in the European Union.

However, Macron stressed that "the decision has been taken by the sovereign British people. I do respect that," and added that he wants the negotiations to be led and coordinated by a European mission.

He said that from a European point of view, as long as the negotiations are not over, there is still a possibility to change the course of the events.

Britain voted to leave the European Union in a referendum last year.

France and Britain also announced an anti-terror action plan to crack down on radicalization through social media.

After talks with May in Paris, Macron said both leaders agreed that social networks were not doing enough to stamp out terror propaganda.

May arrived in Paris earlier in the day with her leadership hobbled by a catastrophic election last week. She was greeted by Macron in the Elysee courtyard and met with the president's wife, Brigitte Macron, in the palace's vestibule before a joint working dinner.

The two leaders are also scheduled to attend a France vs England friendly soccer match at the Stade de France stadium in Paris. The match will honor victims of the recent attacks in Manchester and London, with a moment of silence and the Oasis song "Don't Look Back in Anger" played by the French Republican Guard.

Three attackers mowed down pedestrians on London Bridge and then stabbed people in nearby Borough Market on June 3. Eight people were killed and dozens more injured. On May 22, a man detonated a bomb as crowds were leaving an Ariana Grande concert in Manchester, killing 22 people.

France's players were touched by the overwhelming show of support they received from England fans when they played an exhibition match at Wembley Stadium on Nov. 17, 2015— just four days after attacks hit a Paris stadium, cafes and a rock concert, killing 130 people. England fans that night sang along with the French anthem.