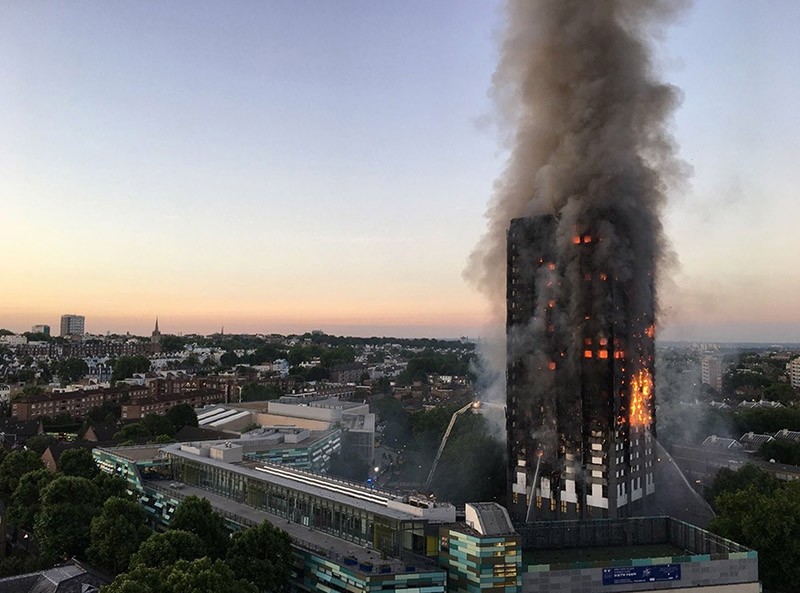 This handout image received by local resident Natalie Oxford early on June 14, 2017 shows flames and smoke coming from a 27-storey block of flats after a fire broke out in west London. (AFP Photo)
by Compiled from Wire Services Jun 14, 2017 12:00 am

A fast-moving overnight fire engulfed a 24-story apartment tower in London on Wednesday, killing at least 12 people and injuring 74 others, police said. Desperately trying to avoid the flames, residents threw one baby and other small children from high windows to people down on the sidewalk, witnesses said.

Police commander Stuart Cundy gave the death toll of 12 but added the figure was likely to rise "during what will be a complex recovery operation over a number of days."

Paul Woodrow, head of operations for the London Ambulance Service, said 20 of the 74 injured were in critical condition.

Witnesses said they heard screaming from the upper floors as the flames rose in the night and one desperate resident could be seen waving a white cloth from a top floor window.

"There have been a number of fatalities. I cannot confirm the number at this time due to the size and complexity of the building," London Fire Brigade chief Dany Cotton told reporters at the scene.

The London Ambulance Service said later Wednesday that 64 patients were treated in hospitals with 20 people in critical condition.

Four hours after the alarm was raised, flames could still be seen on several floors of the blackened residential building, which was shrouded in a cloud of thick black smoke.

Large pieces of debris could be seen falling from Grenfell Tower, a 1970s block in the working-class north Kensington area -- a short distance from chic Notting Hill.

Frantic families at the scene attempted to call their loved ones, fearing they could be stuck inside, and were being directed by police to a nearby restaurant where some of the injured were being treated.

The fire brigade said 40 fire engines and 200 firefighters had been called to the blaze in Grenfell Tower, which has 120 flats.

The ambulance service said it had sent more than 20 ambulance crews to the scene.

"Fire is from 2nd to top floor of 27 storey building," the fire service said on Twitter.

Firefighters at the scene said they had managed to evacuate residents up to the 11th floor.

Police were also clearing out nearby buildings because of fears about falling debris and shut down a section of the A40 highway -- a normally busy thoroughfare into London.

A London Underground line passing the area near Latimer Road station was also shut down.

"This is a large and very serious incident and we have deployed numerous resources and specialist appliances," he said.

Actor and writer Tim Downie, who lives nearby, said: "It's horrendous. The whole building is engulfed in flames. It's gone. It's just a matter of time before this building collapses".

Police said in a statement they were called at 1:16am (0016 GMT) "to reports of a large fire at a block of flats in the Lancaster West Estate".

The apartment block was built in 1974.

Local residents had warned a year ago about a potential fire risk caused by rubbish being allowed to accumulate during improvement works.

"This matter is of particular concern as there is only one entry and exit to Grenfell Tower during the improvement works," read a blog post by the Grenfell Action Group.

"The potential for a fire to break out in the communal area on the walkway does not bear thinking about as residents would be trapped in the building with no way out," it said.