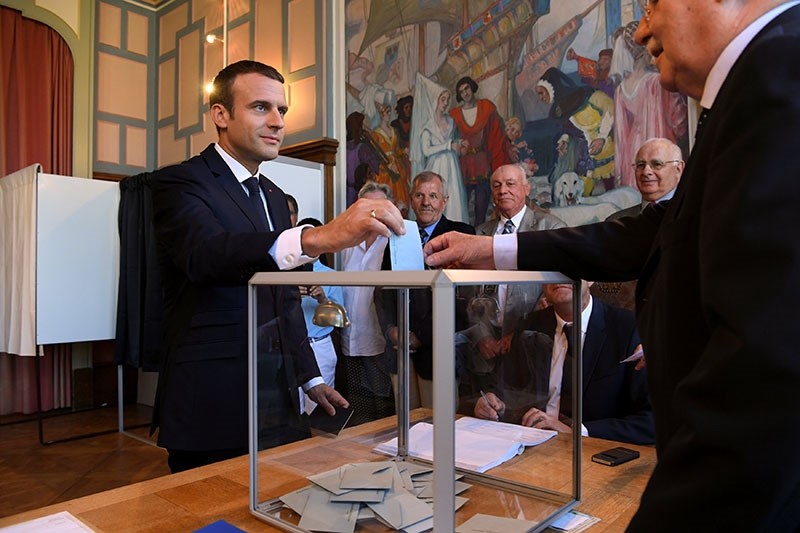 French President Emmanuel Macron (L) casting his vote in the second round of the French legislative elections at the City Hall in Le Touquet, France, 18 June 2017. (EPA Photo)
by Jun 18, 2017 12:00 am

French voters cast their ballots in the second round of a parliamentary election on Sunday expected to hand President Emmanuel Macron a landslide majority that should allow him to embark on deep social and economic reforms.

The vote comes just a month after the 39-year-old former banker became the youngest head of state in modern French history, promising to clean up French politics and revive the euro zone's second-biggest economy.

Turnout, though, could touch record lows, in a sign of voter fatigue after seven months of campaigning and voting, but also of disillusionment and anger with politics that could eventually complicate Macron's reform drive.

Macron's centrist Republic on the Move (LREM) party is barely more than a year old, yet pollsters project it will win as many as 75-80 percent of seats in the 577-seat lower house.

"People know it's already a done deal," Alex Mpoy, a 38-year-old security guard told Reuters TV, echoing the apathy of many voters who intend to abstain.

Macron cast his vote early in the morning in the seaside resort of Le Touquet before flying to a ceremony outside Paris to mark the anniversary of Charles de Gaulle's 1940 appeal for French resistance to Nazi Germany's occupation.

Polls show Macron is on course to win the biggest parliamentary majority since that held by de Gaulle's own conservatives in 1968.

Many of Macron's lawmakers will be political novices, something which will change the face of parliament at the expense of the conservative and socialist parties that have ruled France for decades.

One of the challenges for Macron as he sets out to overhaul labour rules, cut tens of thousands of public sector jobs and invest billions of public cash in areas including job training and renewable energy, will be to keep such a diverse and politically raw group of lawmakers united behind him.

"There has never been such a paradox between a high concentration of power and strong tensions and expectations in terms of changes," Laurent Berger, head of France's CFDT union, told the weekly Journal du Dimanche.

"There is no place for euphoria in victory. There is no providential man, no miracle solution".

Macron's rivals have urged voters not to stay at home, warning power would be concentrated in the hands of one party and democratic debate stifled.

"We need other parties to have some weight," 54-year-old assembly line worker Veronique Franqueville said on the parking lot of a tumble-dryer factory in the northern town of Amiens. "If he wins it all there will be no debate."

Among Macron supporters the mood is very different, with an overwhelming feeling that the president needs to be given a strong enough majority to carry out the policies on which he was elected just over a month ago.

The election is set to send shockwaves through the older parties, with their unity, and even survival, at stake.

The conservative The Republicans are expected to be the biggest opposition group in parliament. But polls see them securing no more than 90-95 seats out of 577.

Some Republican lawmakers could create a separate group to back Macron on a case-by-case basis, while others may see a future firmly in the opposition.

The Socialist Party, which ruled France until last month, faces a humiliating defeat, which could see them with no more than 25-35 seats.

The election also spells trouble for the far-right National Front (FN), seen with only between one and six seats when earlier it had hoped to secure a "massive" presence in parliament. Its leader, Marine Le Pen, is expected to be among those who will be elected.

Far-left leader Jean-Luc Melenchon is also seen winning a seat in parliament. But polls are unclear if his France Unbowed party will reach the 15-strong threshold required to be able to form a parliamentary group.

At that time, pollsters will give projections of the result and official results will start trickling in.