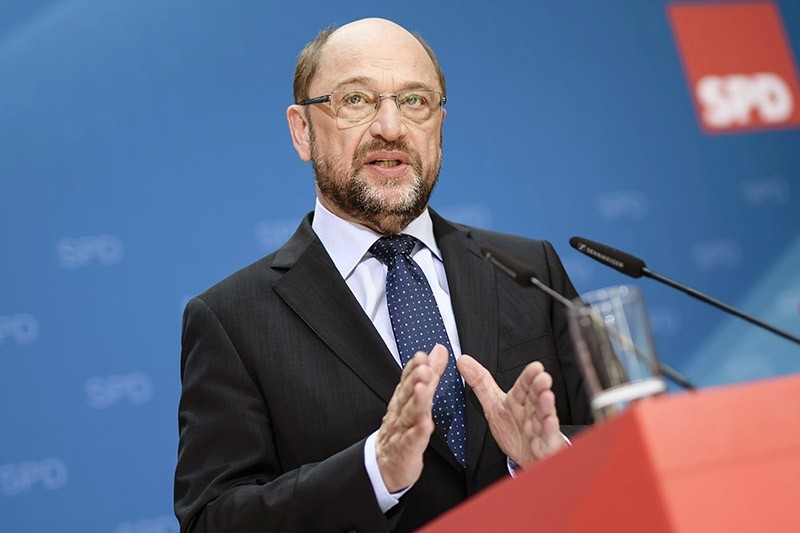 The leader of the Social Democratic Party (SPD) and candidate for German chancellor Martin Schulz during a joint press conference with vice leaders Thorsten Schaefer-Guembel and Olaf Scholz (not seen) in Berlin, Germany, 19 June 2017. (EPA Photo)
by Jun 19, 2017 12:00 am

Germany's Social Democrats (SPD) said on Monday they would tax the rich more and low earners less, making a play to win back working-class voters as the party seeks to revive a flagging election campaign.

SPD leader Martin Schulz hopes to unseat Chancellor Angela Merkel in the Sept. 24 election, but the centre-left party has lost momentum in the polls since making gains following his nomination in January.

"Our proposal is good not just for Germany but also for Europe," he said, adding it would help stimulate domestic demand and suck in more imports from other European countries.

The SPD, currently the junior partner in Merkel's ruling coalition, would also raise the special income levy for those earning 250,000 euros or more to 48 percent from 45 percent.

The plans highlight the SPD's aim of putting social justice at the heart of the election campaign.

But the topic has yet to strike much of a chord with voters, with opinion polls showing the conservatives led by Merkel, who is seeking a fourth term in office, holding a double-digit lead.

The party also wants to replace the flat-rate withholding tax on capital gains with a banded system so that income from labour and capital would be taxed equally again.

Introduced in 2009 by former SPD finance minister Peer Steinbrueck to help fight tax evasion to countries like Switzerland and Luxemburg, withholding tax is charged at 25 percent on private income from capital gains.

Schulz said the SPD would exempt workers on small and medium-sized incomes from the "solidarity tax" that Germany introduced after reunification in 1990 to support its poorer eastern states.

The 5.5 percent tax, which brings in over 15 billion euros a year, was originally envisioned as a short-term measure but has been repeatedly extended despite opposition from some politicians who say it has outlived its usefulness.

The SPD's tax proposal is expected to be discussed and adopted at a party congress next Sunday.

The SPD would also boost infrastructure investment by 30 billion euros over the next four years to improve schools and streets, he said.