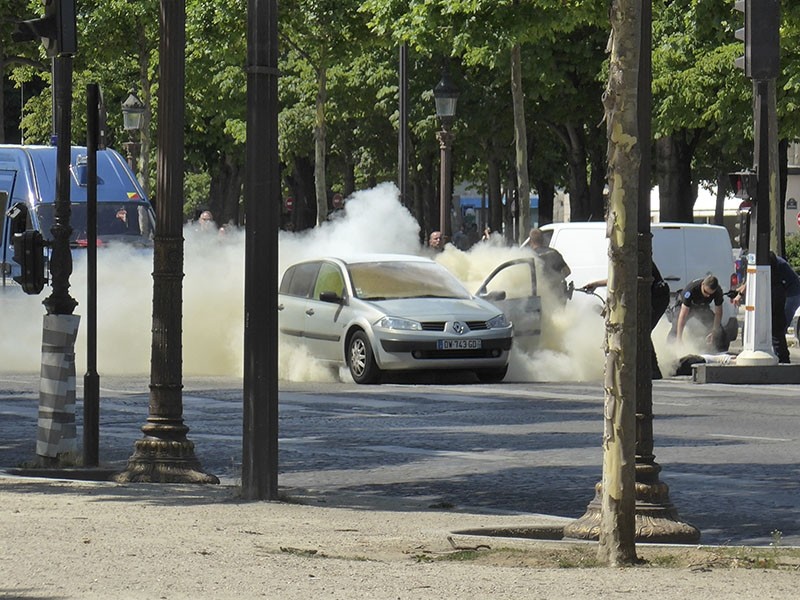 In this photo provided by Noemie Pfister, French gendarmes use fire extinguishers after a man rammed into a police convoy and detonated an explosive device on the Champs Elysees avenue in Paris, France, Monday, June 19, 2017. (Noemie Pfister via AP)
by Jun 22, 2017 12:00 am

Questions arose Tuesday over how a known terrorist, who rammed a car laden with weapons and gas canisters into a police van on Paris's Champs-Elysees, was able to hold a firearms license.

Adam Djaziri, a 31-year-old who had been on a terror watch list since 2015, was killed on Monday as his car smashed into the police van on the French capital's most famous avenue.

Two handguns and a Kalashnikov-style assault rifle were found in the car, while a weapons stash was discovered at the home of the attacker.

A source close to the inquiry said a letter had been found in which Djaziri claimed allegiance to Daesh terror group leader Abu Bakr al-Baghdadi.

Djaziri's father, who has been detained, told AFP his son practiced shooting as a sport, and a source close to the probe said he had nine registered weapons including pistols and an assault rifle.

In the letter, Djaziri boasted that he was playing a "double game" by amassing weapons for an attack by posing as a shooting enthusiast, the source said.

The head of the French Shooting Federation said police officers had visited Djaziri's shooting club to enquire about him -- implying that his keen interest in guns had raised suspicions.

The attempted attack comes as France remains under a state of emergency after a wave of terrorist assaults that have left more than 230 people dead since 2015.

As the month-old government of President Emmanuel Macron prepares to unveil a tougher new anti-terrorism law, Prime Minister Edouard Philippe expressed dismay that Djaziri was able to have a gun permit.

"What I know at this stage is that the first weapons permit was given before this individual was flagged up," he said in an interview with BFM television and RMC radio, but he added that "no one can be satisfied -- and certainly not me" that Djaziri was able to possess dangerous weapons after being put on a watchlist.

Interior Minister Gerard Collomb in an interview with Le Figaro newspaper to appear on Wednesday explained that under current law the authorities cannot systematically take away a weapons permit from someone who is on a watch list, but he vowed to take another look.

"I have asked my services to conduct a new review of the people monitored for radicalization to see who might be likely to legally possess a weapon," he said.

French Shooting Federation chief Philippe Crochard said Djaziri had been licensed for six years, and a source close to the probe said the attacker had requested a renewal of his permit in February.

Djaziri's ex-wife, brother and sister-in-law were detained late on Monday after police questioned them at the family home in Plessis-Pate, south of Paris.

Raised in a strictly Salafist Muslim family, Djaziri had no criminal record but caught the attention of authorities after making several trips to Turkey -- a route used by many European fighters heading to Syria -- which he said were for work.

Turkish authorities have warned their European counterparts about suspected terrorists on several occasions, asking more effective ways on intelligence sharing and preventing radicalized people from departing to Turkey from Europe. But in spite of warnings, the suspects were let go by their native countries without informing Turkey.

In several cases, European security agencies also failed to act upon intelligence shared by Turkey, and the suspects carried out attacks. In one instance, Turkey had warned France twice about Omar Ismail Mostefai, one of the Bataclan attackers, before the incident occurred, but there was no response from French authorities, according to a Turkish official.

Djaziri died of "cardiorespiratory arrest" probably caused by the effects of inhaling the smoke which filled his vehicle after the collision, a source close the probe told AFP.

The assailant's car burst into flames and police pulled the driver from the smoke-filled vehicle.

There were no other casualties from the attempted attack.

Few details have emerged of France's new anti-terrorism law due to be unveiled Wednesday.

But a draft leaked to the daily Le Monde has sparked concern among civil liberties campaigners who worry it could make some emergency measures permanent, such as the ability to conduct searches at any time of day or night and to restrict suspects to a certain geographic area.

On Tuesday evening President Emmanuel Macron reached out to France's Muslim community, being the first head of state in 10 years to attend the annual dinner breaking the Ramadan fast held by the French Council of the Muslim Faith (CFCM).

Macron thanked the Muslim leaders for condemning the terror attacks in France, while also urging the continued fight against the Daesh terror group and "pursuing those who seek to turn our religious sites from places of prayer to places of hate, indeed calling for violence," Macron said.

The current state of emergency in France is due to expire on July 15 but the government is seeking to extend it until November 1.