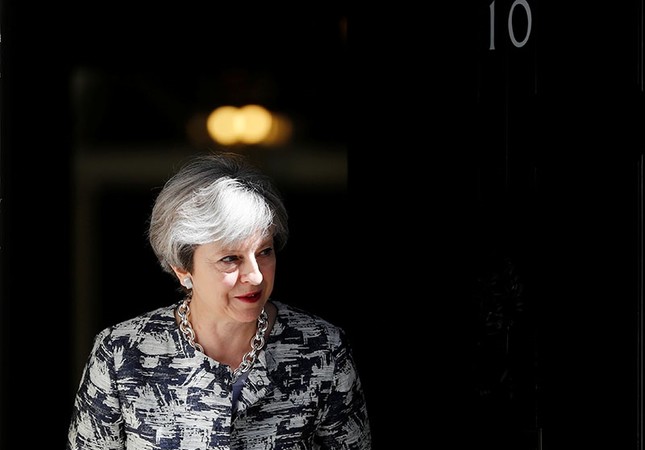 Prime Minister Theresa May's government is not sustainable beyond a few months and there is likely to be another British national election within the next year, Citi said in a research note.

"We continue to think that her premiership is not sustainable beyond a few months, perhaps a year at most, and will be under pressure in the face of contentious parliamentary votes from the very beginning," Citi said.

"Our base case remains that we will have a Conservative leadership contest followed by a new general election within the next 12 months," the bank said.

Following the unexpected loss in votes after the June 8 elections, Prime Minister Theresa May forged a deal with a Northern Ireland party Monday that should give her struggling minority government enough votes to get her agenda endorsed, but at a high cost: more than 1 billion pounds in new funds for Northern Ireland and resentment from Britain's other regions.

The massive injection of funds her government pledged in exchange for the deal struck with the Democratic Unionist Party (DUP) angered the leaders of Scotland and Wales, as well as Northern Ireland's other parties.

It should allow May to win backing in coming days for the Brexit-dominated agenda announced in the Queen's Speech that marked the opening of a new Parliament last week.

Ian Blackford, a leader of the Scottish National Party, said his party would do everything possible to make sure Scotland gets "its fair share" under a formula that prescribes how UK government funds are shared by England, Scotland, Wales and Northern Ireland.

"After weeks of secret backroom negotiations, the Tories have now signed a grubby deal with the DUP," Blackford said. "For years, the Tories have been cutting budgets and services, but suddenly they have found a magic money tree to help them stay in power."

Welsh First Minister Carwyn Jones tweeted that the deal "flies in the face of the commitment to build a more united country."

The prime minister had enjoyed a clear majority in Parliament until she called a snap election in a bid to secure more Conservative seats. Instead, many voters turned to the Labour Party, costing May her majority and forcing her to seek a partner.

She downplayed policy differences between her party and the more socially conservative DUP, which opposes abortion and same-sex marriage but the complicated process of removing Britain from the European Union.

May said the two parties "share many values" and have many commitments in common.

"We also share the desire to ensure a strong government, able to put through its program and provide for issues like the Brexit negotiations, but also national security issues," May said. "So the agreement we have come to is a very, very good one."

The money for Northern Ireland also raised questions in England at a time of severe budget shortages.

British lawmakers are seeking additional funding for the police and security services after recent extremist attacks, as well as more and better public housing following a high-rise apartment fire that killed at least 79 people.

Foster's party had demanded tangible benefits in terms of jobs and investment for Northern Ireland before she would agree to support May's government. The DUP has 10 seats in Parliament, enough to guarantee passage of the government's agenda.

The June 8 election gave May's Conservatives the most seats, but not enough to automatically carry legislation, notably the thorny choices to come concerning Britain's departure from the European Union.'

Opposition Labour Party leader Jeremy Corbyn said the agreement suits May's wish to stay in power but does little for the country.

"Where is the money for the Tory-DUP deal coming from?" the Labour leader asked. "And, will all parts of the U.K. receive the much-needed additional funding that Northern Ireland will get as part of the deal?"

The money is going to address issues near and dear to the 1.8 million people of Northern Ireland. As part of the arrangement, funds will be earmarked to address a major traffic bottleneck involving three busy roads, as well as improving high-speed internet services.

Northern Ireland's other political parties, principally Sinn Fein, have objected to a Conservative alliance with the DUP. They say it jeopardizes the government's pledge to be a neutral arbiter as part of the Good Friday agreement, which in 1998 brought peace to Northern Ireland after decades of sectarian strife.

"The price of today's DUP-Tory deal is DUP support for continued Tory austerity and cuts to public services," Adams said. "It provides a blank check for a Tory Brexit which threatens the Good Friday Agreement."

Share on Facebook Share on Twitter
Previous in Europe A Ukrainian serviceman was killed in a car bomb explosion in the center... Next in Europe Russia's Yuri Dolgoruky nuclear-powered submarine successfully test-fired...
DAILY SABAH RECOMMENDS