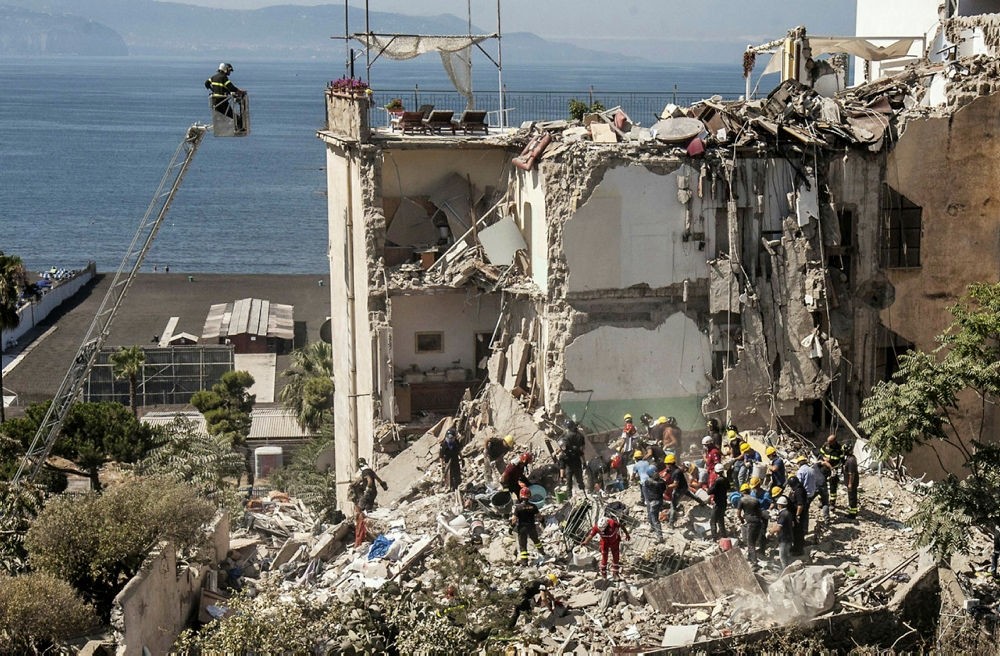 Firefighters search the rubble after two floors collapsed in a small four-storey building in Torre Annunziata, in a town near the Italian city of Naples, on July 7, 2017. (AFP Photo)
by Associated Press Jul 07, 2017 12:00 am

Rescuers were using their bare hands to comb through the rubble looking for eight people missing after an apartment block collapsed Friday near the Italian city of Naples, firefighters said.

Two floors of the small four-storey block in the town of Torre Annunziata, at the foot of the volcano Mount Vesuvius, collapsed at around 6.30 in the morning (0430 GMT).

Media reports said neighbors had heard no explosion -- just the crash when the building collapsed.

Witnesses said a freight train had passed on the neighboring railway track just before the building collapsed, while others noted that renovation works had been under way on the lower floors.

Prosecutors in Torre Annunziata have opened an investigation to determine what caused the accident.

Some 30 firefighters, joined by dozens of volunteers and relatives of the missing, were searching the wreckage for survivors in the scorching heat.

The fire service said two officers had been lightly injured during search operations.

The rescuers were stopping regularly, hoping to hear calls for help. Sniffer dogs were also on site to help locate the missing.

Train traffic on the adjacent railway track was halted as a safety precaution.