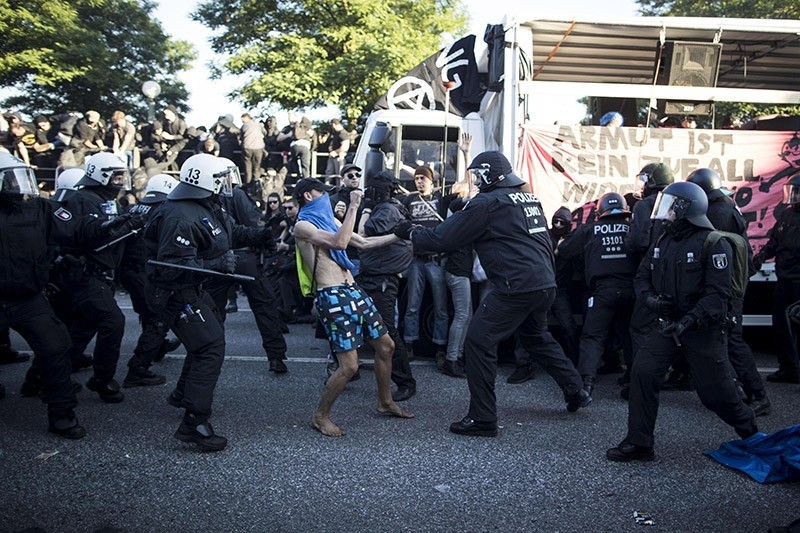 Protesters clashed with police, torched patrol cars and blocked roads in the German city of Hamburg on Friday in fresh violence just before the start of the G20 summit, police said.

"An operation is under way against violent individuals" who threw petrol bombs and set fire to patrol cars near a police station in the city's Altona district, federal police said on Twitter.

In the west of the city, a "plume of black smoke" was rising, and cars in some areas had been set alight, the local Hamburg police said separately.

MORE — Dozens of cars torched in several Hamburg districts just before the start of the G20 summithttps://t.co/pYKZ4VEWcA pic.twitter.com/aTQhi0Qpyp

About 25 to 30 burnt out cars in the Altona and Blankenese districts of Hamburg were seen as the Group of 20 summit got under way, dpa said.

Meanwhile, other media sources reported that German police have used water cannon to disperse a sit-in on a Hamburg street that U.S. President Donald Trump's delegation could possibly take to get to the Group of 20 summit venue.

LATEST — Protesters, police clash in fresh protests ahead of G20 summit in Germanyhttps://t.co/pYKZ4VEWcApic.twitter.com/pGRUpeeTkL

On Thursday, a planned peaceful march by around 12,000 people protesting against globalization turned violent.

Friday's clashes occurred as leaders from the world's 20 biggest developed and emerging economies were to begin a two-day meeting focusing on trade, terrorism, climate change and other key global issues.

Hamburg, a vibrant port city, is a citadel of left wing radicals and authorities have long been bracing for possible violence on the sidelines of the summit.

The German police officers' union GdP on Friday hit out at anarchist groups called the Black Blocks, accusing them of "hijacking peaceful demonstrations by tens of thousands of people to deliberately attack" police.