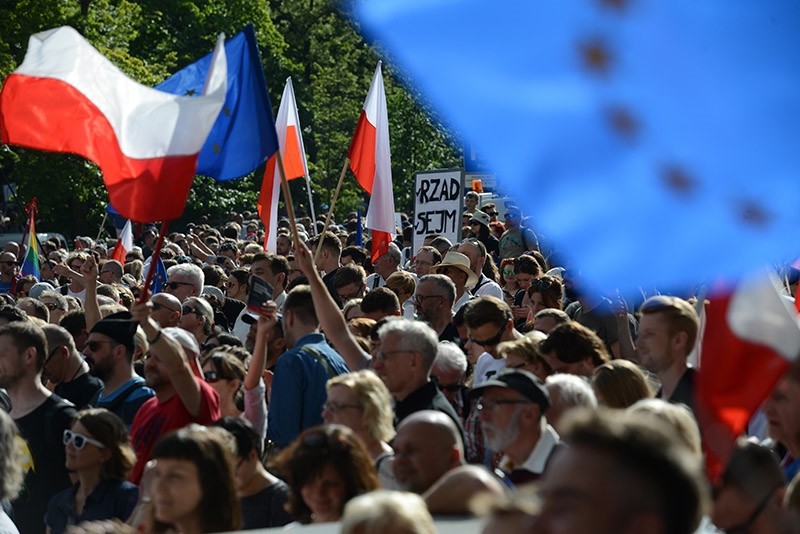 People participate in a protest against changes in the judicial law and the Supreme Court in front of the Sejm building in Warsaw, Poland, July, 16, 2017. (EPA Photo)
by Daily Sabah with Wires Jul 19, 2017 12:00 am

"We will swiftly prepare infringement procedures for breach of EU law ... to be launched next week," Timmermans said.

In a worsening 18-month standoff between Warsaw and Brussels, the European Commission said Poland's draft reforms could have a "very significant negative impact on the independence" of the courts.

"We are very close to triggering Article 7," Commission Vice President Frans Timmermans told a press conference in Brussels, following a high-level meeting on the issue.

Article 7 was designed as means to to hold EU states accountable for rights violations, and involves disciplinary action against members that committed fundamental rights violations. The article includes two steps – firstly, the European Council may give a formal warning to any country accused of violating fundamental rights. If the warning fails to make an impact, the Council of Ministers may impose sanctions and suspend voting rights.

The matter could be discussed as early as next week.

The Article 7 can be invoked by a qualified majority of member states, meaning that Poland's ally Hungary would not be able to veto the move if enough members choose to punish Warsaw.

Timmermans said the stakes were high as "these laws considerably increase the systemic threats to the rule of law in Poland."

If enacted, he warned, they would put the "judiciary under the full political control of the government" and make "the judges serve at the pleasure of the political leaders."

Officials from the commission, the EU's executive arm, said no action can be taken as long as the draft laws have not been adopted.

In an accompanying statement, the Commission said it "urges the Polish authorities to put the new laws on hold" and to re-engage Timmermans in a dialogue to address the "serious concerns."

After launching reforms of the constitutional court following its election victory in late 2015, the Polish government last week moved to overhaul the entire judicial system.

A draft law giving the Polish justice minister power to make appointments to the supreme court triggered angry exchanges between the ruling party and the opposition that ended up suspending debate in the Polish parliament late Tuesday.

Debate was due to resume early Wednesday.

The European Commission has already warned the ruling Law and Justice Party (PiS) to reverse changes to the constitutional court or face sanctions for breaching EU norms on the rule of law and democracy.

Timmermans had in recent months resisted pressure from European Parliament and other critics to move to sanctions, favouring continued dialogue with PiS.

But the pressure and the stakes keep mounting.

On Sunday, thousands rallied Warsaw, Krakow, Szczecin and Wroclaw against reforms that were passed by the senate the day before, and more protests took place Tuesday in Warsaw.

The first bill stipulates that from now on the parliament -- which is controlled by the PiS party -- will choose the members of the National Council of the Judiciary (KRS), whose role is to protect the independence of the courts.

The second bill states that the justice minister will name the chief justices of Poland's common courts.

Both texts were adopted days earlier by the lower house of parliament and now they need only to be signed by President Andrzej Duda, who is closely allied with the PiS, to become law.

But Duda, in a surprise move on Tuesday, warned he would not approve the reform of the Supreme Court unless lawmakers amended the bill giving parliament greater control over KRS, the body that oversees the selection of judges.

He tabled a short draft bill stating that the members of the KRS would need to be elected by 60 percent of lawmakers, denying the party complete control to decide the composition of the KRS.

"This draft bill should stop the Council from being subject to a single party, a single political group. This is unacceptable... It would be seen as a political diktat," Duda said.

At the European Parliament, the main political groups urged the Commission "to act now and clearly" to save Poland's democracy from the reform push, according to a letter they sent Monday.