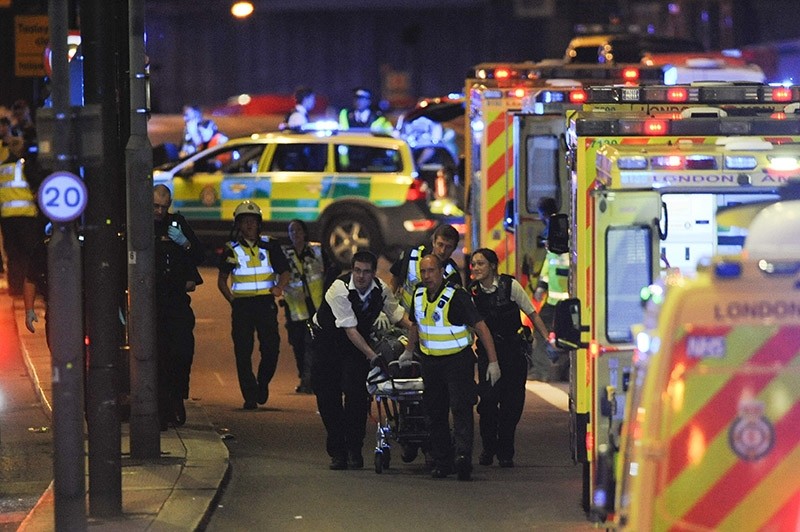 Police officers and members of the emergency services attend to a person injured in an apparent terror attack on London Bridge in central London on June 3, 2017. (AFP Photo)
by daily sabah
Aug 08, 2017 12:00 am

A secretive Daesh unit has been training terrorists from the United Kingdom to launch future attacks on British soil, the Sunday Times reported last weekend.

According to the Sunday Times report, the captured terrorists said that the same unit also trained the Daesh terrorists who carried out attacks in Paris and Brussels.

The preparations for fresh recruits reportedly took place in al-Kharsa brigade, where they would be trained for seven months before being sent home to carry put attacks on behalf of the terror group.

"It is very hard. Every European who crosses the border to Syria, they are offered [the opportunity] to join. If 20 start the training, only five finish it. Then after that they go back to Europe and attack," a terrorist was cited saying.

One of the captured terrorists also claimed that some 50 people coming from countries including the U.K., Belgium, France and Germany had completed the training program, which involved drills including bomb construction and harsh physical endurance trials.

The aim of the terrorist training was to ensure that all recruits were willing to sacrifice their lives for Daesh, the militant said.

The captive Daesh terrorist also warned of future Daesh attacks, saying that there would be more suicide attacks in Europe because "the coalition is bombing them a lot."

The Sunday Times reported that Belgian-born Abdelhamid Abaaoud was among the past recruits who completed the Daesh training program in Syria.

Abbaaoud was one of those responsible for the November 2015 Paris attacks that killed 130 people.

EU Counterterrorism Coordinator Gilles de Kerchove previously announced that an estimated 5,000 terrorists from Europe were trained in Syria and Iraq before returning home, most of them undetected by authorities.

Reuters cited Kerchove saying that about 2,000-2,500 European "foreign terrorist fighters" were still in Syria or Iraq.