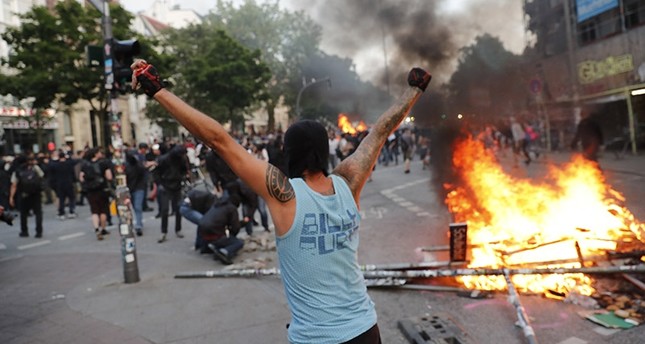 A protester lifts his hands next to a burning barricades in Schanzenviertel quarter in the St. Pauli district during the G-20 summit in Hamburg, Germany, 07 July 2017. (EPA Photo)

Germany's Interior Ministry has banned an internet site on allegations it was being used to foment left-wing extremist violence, including at this summer's G-20 summit.

Interior Minister Thomas de Maiziere said Friday the site "linksunten.indymedia.org" was responsible for mobilizing "violent actions and attacks on infrastructure" targets. Among other things, he said the site provided information on how to build gasoline bombs and other incendiary devices with timers.

"There's no place for radical, violence-prone extremism in our society from any side," de Maiziere said.

The ban of the site, and a search of premises in the western university city of Freiburg near the French border, comes a month before national elections in which Chancellor Angela Merkel will seek a fourth term.

Police searched five separate locations and confiscated knives, batons and slingshots, but no arrests were made.

De Maiziere has warned repeatedly that police and security services must crack down on far-left and anarchist groups just as they do against far-right organizations.

Share on Facebook Share on Twitter
Previous in Europe A Muslim woman wearing a headscarf was beaten unconscious by a mob... Next in Europe The French Agriculture Ministry has announced Friday that a number...
DAILY SABAH RECOMMENDS