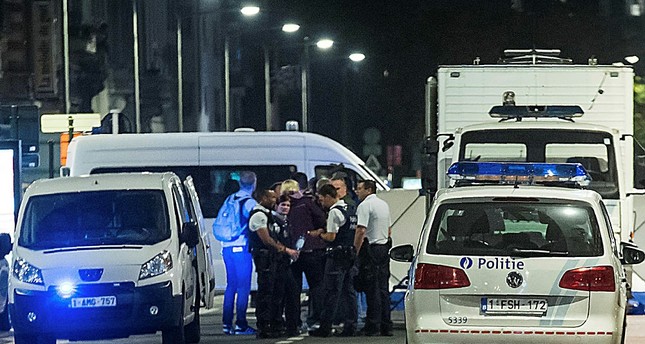 Daesh on Saturday claimed the knife attack against patrolling soldiers a day before in Brussels, an assault that came just hours before a sword-wielding assailant wounded police outside London's Buckingham Palace.

The knifeman in Brussels, who hurt a soldier on Friday in what authorities said was an "attempted terrorist murder", was shot dead, while police in London overpowered a man who injured three unarmed officers outside the royal residence with a four-foot (1.2-meter) blade.

The 26-year-old man in the London violence has been arrested under the Terrorism Act, which allows for 14 days of pre-charge detention, and is being held at a police station in the British capital.

The two attacks come as much of Europe is on high alert following a string of deadly assaults over the past two years -- most of which have been claimed by terrorists.

Last week, Spain was hit by twin vehicle attacks which left 15 dead, and two people were killed in a stabbing spree in Finland.

"The perpetrator of the stabbing operation in Brussels is one of the soldiers of Daesh," the organi

One of the soldiers was slightly hurt in the attack which Brussels Mayor Philippe Close said had been carried out by a "lone individual".

During the attack near the Grand Place in central Brussels at 8:00 pm (1800 GMT), the man rushed at several soldiers from behind and struck them with a knife, prompting one of them to open fire.

"The man was hit and died shortly afterwards in hospital from his wounds," the prosecutors' statement said.

The assailant was a Belgian national of Somali origin who was born in 1987, authorities confirmed. He arrived in the country in 2004 and was granted Belgian nationality in 2015.

Although not known for any terror-related activities, he had an assault and battery charge on his record from February, the statement said.

Less than two hours later, a man drove his car at a police van outside Buckingham Palace.

The attacker reached for a four-foot sword and had to be incapacitated with CS gas, police said in a statement on Saturday.

Three officers were slightly injured in the incident.

No members of the royal family were in the residence at the time of the attack.

The man's identity has not been disclosed but police said he was from Luton, a city 30 miles (50 kilometers) north of London.

"Officers from the Counter Terrorism Command are now investigating and searches are being carried out in the Luton area today," the police said in a statement.

"We believe the man was acting alone and we are not looking for other suspects at this stage."

With much of Europe on edge over the attacks, many of them low-tech assaults using knives or vehicles as weapons, thousands of people took to the streets of Barcelona on Saturday in a defiant march under the slogan "No tinc por" -- Catalan for "I'm not afraid".

The Brussels attack happened on a boulevard near the Grand Place central square, one of the "sensitive" areas of the capital where armed soldiers are on patrol because of the terror threat.

"I heard yelling and straight away two shots," a witness called Yohan told AFP. He did not wish to give his surname.

As he approached, he said he saw "a soldier bleeding from his hand and a man on the ground," who had a beard and was wearing a hood.

Soldiers have been deployed at railway stations and landmark buildings in the Belgian capital since the November 2015 attacks on Paris, when investigators found the assailants had a clear link with Brussels.

Patrols have been stepped up since suicide bombers struck Zaventem Airport and the Maalbeek metro station in March 2016, killing 32 people and wounding hundreds.

The carnage in Paris, which left 130 people dead and hundreds wounded, was claimed by Daesh, which also said it was behind the bombings in Brussels.

In June, a man who tried to bomb a Brussels Central train station was shot dead by a soldier.

In Britain, 35 people have been killed in three extremist attacks in London and Manchester since March.