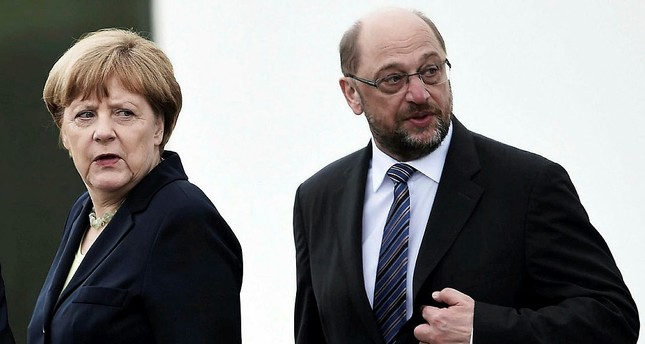 Germany's center-left chancellor candidate Martin Schulz sharpened his attack on Angela Merkel on Sunday, calling the incumbent aloof and out of touch with voters.

With exactly four weeks remaining until the Sept. 24 election and a week before their only TV debate, Schulz and Merkel, who is seeking a fourth term, engaged in an indirect TV interview battle on separate networks on Sunday.

Schulz, whose Social Democrats (SPD) trail Merkel's conservative Christian Democrats by 15 percentage points, first told ARD TV that Merkel's behavior at the end of her third term reminded him of the way former Chancellor Helmut Kohl had lost touch with voters during his fourth term in the late 1990s.

"There are many areas where people have the feeling that Merkel is lost in reverie," Schulz said, in particular accusing her of using military aircraft at "dirt cheap" prices to fly around the country for her 50 campaign stops in the final six weeks of the election.

"More and more people are noticing how aloof she is," said Schulz. "That's the kind of aloofness that will mobilize my voters."

He said the conservatives' campaign was simple: "We have Angela Merkel and that's enough for our future."

"The last four years of the Kohl era was a period of stagnation and political agony," he added. "I want to spare Germany that again."

He added that she seemed to "have no plan at all" to deal with the issue of pollution from diesel emissions that exceeds the limits of several cities.

Merkel avoided any kind of jousting match with Schulz in her interview an hour later on Sunday and less than a mile away with ZDF television, saying only that she had sworn an oath of office to serve everyone in Germany.

"I'm really doing everything I can to fulfill that oath," she said when asked about Schulz's criticism. "And I am looking forward to the TV debate with Martin Schulz."

Both Schulz and Merkel announced plans to improve federal investment in infrastructure for schools, which is ordinarily a state issue but has become a hot campaign topic.

Share on Facebook Share on Twitter
Previous in Europe Dozens of army wives marched in Paris on Saturday over the "deplorable... Next in Europe Police and firefighters warned local residents to stay indoors and...
DAILY SABAH RECOMMENDS