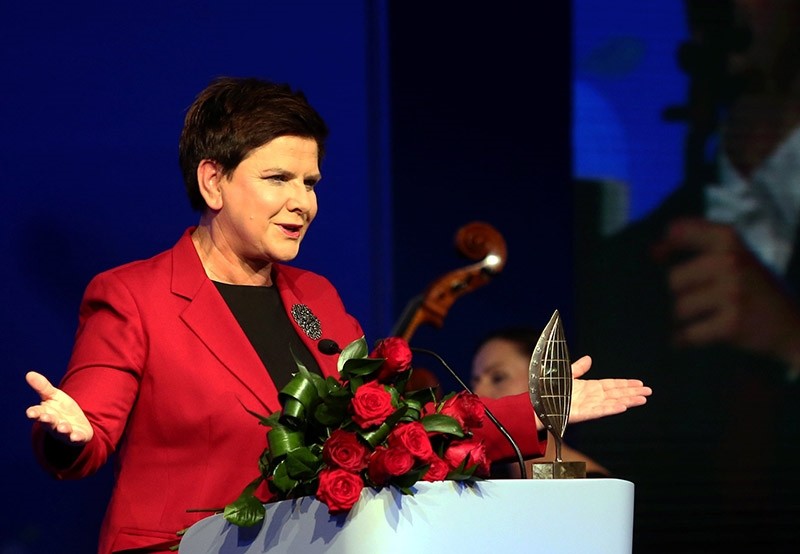 Polish Prime Minister Beata Szydlo delivers a speech after receiving Man of The Year Award of XXVII Economic Forum in Krynica, during a gala at the end of the first day of the Forum in Krynica-Zdroj, Poland, 05 September 2017. (EPA Photo)
by Sep 09, 2017 12:00 am

Germany should pay reparations for losses suffered in World War II, the prime minister of Poland said in an interview Saturday, adding fresh fuel to a bitter debate between the two neighbors.

"This is simply a matter of decency and justice towards Poland," Prime Minister Beata Szydlo told the Polish Press Agency.

Poland suffered massively at the hands of invading Nazi Germany in World War II; some 6 million people were killed.

The demands for wartime reparations have recently grown louder in Poland, with senior leaders in Poland's national-conservative government pushing for the payments.

Szydlo said the government was still evaluating what action to take and that the issue had not yet been elevated to the diplomatic level.

The German government has repeatedly cited a post-war declaration in which Poland had waived its right to further compensation.

While insisting that Germany took full responsibility for the "unspeakable crimes" of Nazi Germany, government spokesman Steffen Seibert said Friday that Berlin saw "no reason to doubt the internationally binding effect of the 1953 reparations waiver."

Poland says that pressure from the leadership of the Soviet Union had led to it abandoning the idea of reparations.

The renewed debate over payments by Germany to its formerly occupied neighbor comes at a time of already tense relations between Berlin and Warsaw, due to political differences over migration and an ongoing legal procedure against Poland by the European Union over judiciary reforms.

An exact figure has not been placed on the restitution that Poland intends to seek.