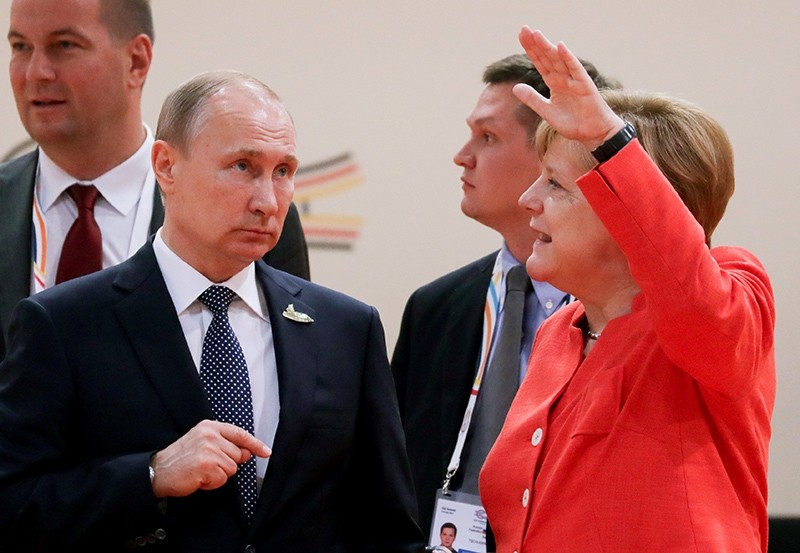 German Chancellor Angela Merkel talks to Russia's President Vladimir Putin at the start of the first working session of the G20 meeting in Hamburg, Germany, July 7, 2017. (Reuters Photo)
by Daily Sabah with Reuters Sep 11, 2017 12:00 am

Russian President Vladimir Putin agreed Monday to possibility of deploying U.N. peacekeepers in eastern Ukraine not only on the contact line between pro-Russian separatists and Ukrainian army after phone call with German Chancellor Angela Merkel.

Last week, Putin said that Russia intended to draft a U.N. Security Council resolution to this end, saying it would help resolve the problem in eastern Ukraine, though he also said preconditions would have to be met before any deployment.

Merkel's spokesperson said Berlin welcomed the proposal "in principle" adding that "it remains to be seen whether agreement can be reached on the details."

According to Kremlin statement, both leaders agreed that any violation of the ceasefire was unacceptable, including the recent "school truce," supported by the countries of 'Normandy contact group' – France, Germany, Russia and Ukraine.

Putin, in a phone call with Merkel, gave her a detailed description of Russia's initiative to establish a U.N. mission to protect observers from a special Organization for Security and Co-operation in Europe (OSCE) monitoring mission in Ukraine, the Kremlin said.

Taking into account German chancellor's views, Putin agreed to amend the draft U.N. Security Council resolution to include peacekeeping forces not only on the contact line between the warring parties but also in other parts where OSCE inspectors work.

Ukraine believes external peacekeepers from the OSCE should be deployed throughout separatist-held territory and on the sections of the Ukraine-Russia border that are not under Kiev's control. Kiev accuses Moscow of sending troops and heavy weapons to the region, which Russia denies.