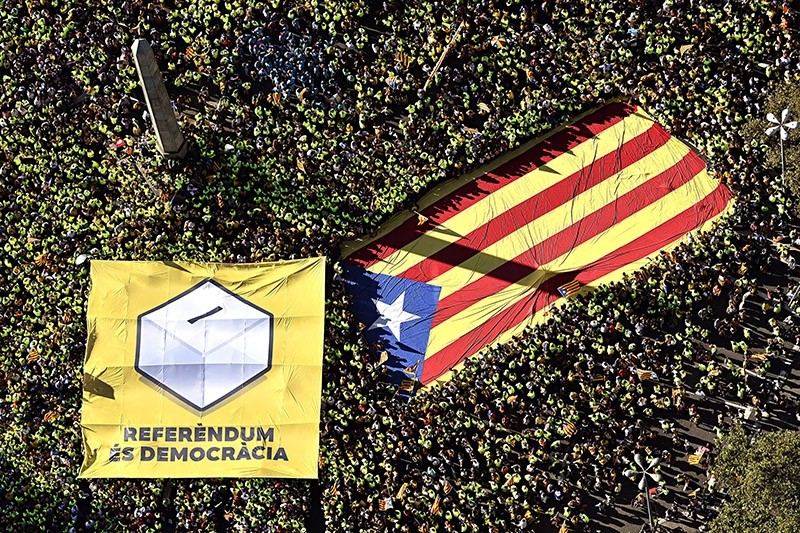 A handout photo made available by ANC shows thousands of people carrying giant Catalan Flag and a banner reading 'Referendum is Democracy' as they gather during the National Day of Catalonia celebrations in Barcelona, Spain, 11 Sept 2017. (EPA Photo)
by Sep 12, 2017 12:00 am

Prosecutors in Catalonia ordered police Tuesday to seize ballot boxes, election flyers or any item that could be used in a banned independence referendum called by the Spanish region's separatist executive.

The vote is set for October 1 and the northeastern region's separatists are determined to go ahead with it despite Madrid's refusal and a court ban, as a struggle between Catalonia and Spain's central government escalates dramatically.

On Tuesday, the chiefs of the Guardia Civil and National Police forces, and of the Mossos d'Esquadra -- a regional squad controlled by the Catalan government -- were called to the prosecutor's office in Barcelona.

They were then ordered to take action against authorities, civil servants or individuals "to avoid offences being committed," prosecutors said in a statement after the meeting.

Under Spanish law, prosecutors have the power to give instructions to judicial police forces in investigating offences, as do judges.

"Police officers... will directly adopt the measures necessary to seize resources destined at preparing or holding an illegal referendum," they said in the statement.

Catalonia's pro-independence executive, headed up by regional president Carles Puigdemont, called the referendum last week and they have vowed to see it through despite a ban by Prime Minister Mariano Rajoy's conservative government and the Constitutional Court.

Prosecutors have launched an official complaint against Puigdemont and his government members, accusing them of civil disobedience, misfeasance and misappropriation of public funds -- the latter carrying jail sentences of up to eight years.

But the order given to the police forces leaves the Mossos d'Esquadra in particular in a tough spot.

On the one hand, by law they have to follow prosecutors' orders but they are also directly dependent on the regional government against which they have been told to act.

Justice Minister Rafael Catala told Spanish television that "the Mossos are there to serve citizens, all of them, not just a few."

"Their main function is to keep people safe," he told Rac1 radio.

"That's their priority," he added, refusing to say whether he would in turn tell the Mossos to disregard prosecutors' orders.