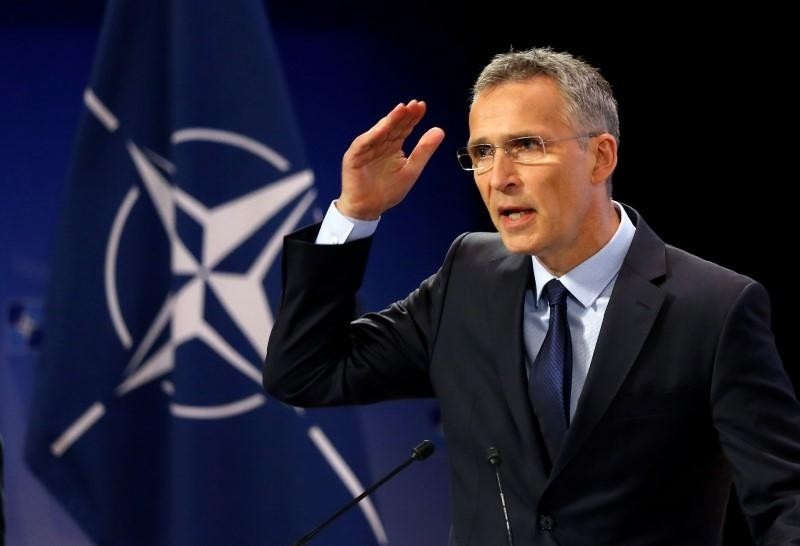 Stoltenberg addresses a news conference ahead of a NATO defence ministers meeting at the Alliance headquarters in Brussels, June 28, 2017. (REUTERS Photo)
by Compiled from Wire Services Sep 15, 2017 12:00 am

"North Korea's missile launch is another reckless breach of U.N. resolutions -- a major threat to international peace and security which demands a global response," he said in a tweet.

The launch earlier Friday of a ballistic missile over Japan was the second in less than a month, and came after the United Nations Security Council imposed an eighth set of measures on the isolated country following its sixth nuclear test earlier this month.

South Korea's Joint Chiefs of Staff said the missile was launched from the Pyongyang area before flying a distance of around 3,700 kilometers (2,300 miles) over northeastern Japan and landing in the Pacific Ocean, according to local news agency Yonhap.

The projectile was assessed to be another intermediate-range ballistic missile, although it traveled 1,000 km (621 miles) further than the North's previous test -- placing American forces and strategic assets in Guam well within the North's range.

Following the "provocative" launch, Secretary of State Rex Tillerson said past U.N. Security Council resolutions are the bare minimum response Pyongyang can expect as he called on China and Russia to take action against the North.

"China supplies North Korea with most of its oil. Russia is the largest employer of North Korean forced labor," he said in a statement. "China and Russia must indicate their intolerance for these reckless missile launches by taking direct actions of their own."

The U.K.'s Foreign Secretary Boris Johnson also urged the international community "to play their part in changing the course North Korea is taking".

"This week the most stringent UN sanctions regime placed on any nation in the 21st century was imposed on North Korea, after being unanimously agreed at the U.N. Security Council. These measures now need to be robustly enforced.

"We are working to mobilize world opinion with the aim of achieving a diplomatic solution to the situation on the Korean peninsula," Johnson added.

Seoul's response was swift -- the South Korean military announced a ballistic missile drill of its own immediately after revealing Pyongyang's launch, while President Moon Jae-in presided over a National Security Council meeting.

The United Nations Security Council is also expected to gather later in the day, having only just unanimously adopted its ninth resolution imposing sanctions on North Korea this past Monday in response to the reclusive state's sixth ever nuclear test on Sept. 3.

Pyongyang condemned the latest resolution, threatening, Wednesday, to completely destroy both the United States and Japan.