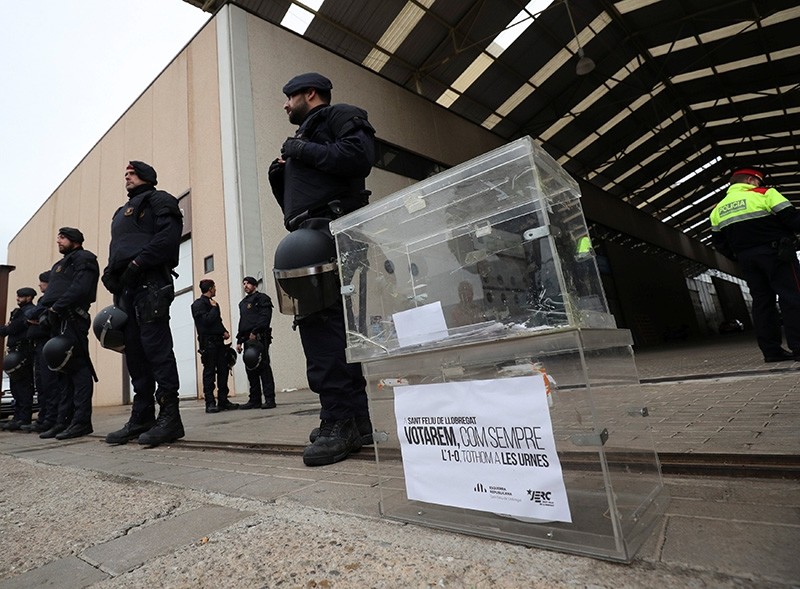 A ballot box, placed by demonstrators, is seen next to Catalan regional police members, who stand guard outside a printing facility, during a raid in search of ballot papers in Sant Feliu de Llobregat, Spain, Sept. 15, 2017. (Reuters Photo)
by Sep 16, 2017 12:00 am

Armed police in Spain have raided several print works and newspaper offices in Catalonia in recent days in a hunt for voting papers, ballot boxes and leaflets to be used in an Oct. 1 independence referendum which Madrid vehemently opposes.

The searches are part of a concerted effort by the government to prevent the ballot from going ahead, amid fears that a vote to break away could trigger a political crisis even if Spain does not recognize the outcome.

On Friday, the government passed measures to tighten control over the region's spending to stop it using state cash to pay for the ballot, and earlier this week Madrid summoned over 700 Catalan mayors for questioning over their support for the vote.

"They've lost the plot," said Albert Batet, mayor of the town of Valls and one of those summoned for questioning. "They are persecuting mayors, the press, printers. They are stretching the limits of democracy."

Catalonia's president Carles Puigdemont, who faces criminal charges for organizing the referendum, says he has over 6,000 ballot boxes ready to deploy next month, but their whereabouts are a secret.

"Right now, we have no idea where they are," said Toni Castejon, spokesman for the Catalan police force union.

A spokesman for the Catalan regional government declined to say where the ballot boxes were or how the government was going to get them out of hiding to voting stations on Oct. 1.

On Friday, police confiscated 100,000 campaign leaflets in a raid in Catalonia, the Interior Ministry said, without saying where. Catalonia's top court issued a warning on Friday to seven newspapers, many of them online, not to publish campaign notices for the referendum, a court spokesman said on Saturday.

At the offices of Catalan newspaper El Vallenc in Valls, some 50 km west of Barcelona, six armed police knocked on the door last Saturday with a warrant to search the offices, said its editor, Francesc Fabregas.

"They didn't say what they were looking for," Fabregas told Reuters, adding that he had not printed any voting papers.

The raid led to an impromptu crowd gathering outside the building, with people singing the Catalan anthem and waving slips of paper chanting 'Where are the ballot papers?'.

"When people saw that the streets had been cut off they started coming over with banners, they handed out roses to the police - the street turned into a party," said Fabregas.

For some supporters of the independence movement, the search for the ballot boxes and voting papers has become a symbol of what they see as state repression.

Images of the Catalan police force - the Mossos d'Esquadra - seizing what for many are symbols of democracy would be highly inflammatory, police say.

The Mossos report to the Catalan regional government and are highly regarded by Catalans, particularly after their handling of the militant attacks in the region in August that killed 16.

But Spanish state prosecutors have ordered all police - including the Catalan force - to act.

"What no one wants is the image of the Mossos taking away the ballot boxes," said Castejon of the police union. "That would lead to a lot of anger and even civil unrest."

Madrid has the constitutional power to take over a regional government or send in the police to force Catalonia to drop the vote, but either step would rock Spain's decentralized model of government where power is devolved to 17 self-governed regions.

Although polls show less than half of Catalonia's 5.5 million voters want self-rule, most in the wealthy northeastern region want the chance to vote on the issue, causing unease that is beginning to be felt in financial markets.

The Budget Ministry said that uncertainty created by the stand-off could damage the economy and push up sovereign borrowing costs. Some investors sold Spanish government bonds and switched to Italian debt earlier this week.

Puigdemont and Barcelona mayor Ada Colau on Friday appealed to the Spanish government for dialogue to avert a crisis.

But Puigdemont has shown no signs of backing down.

"Does anyone think we're not going to vote? What kind of people do they take us for?" he said to cheering crowds from a stage in a bull-ring in Tarragona to launch the referendum campaign on Thursday.