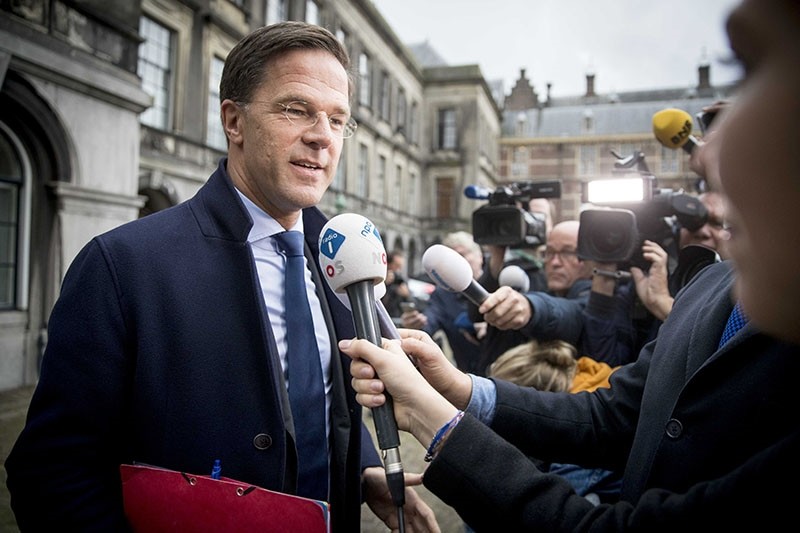 After 208 days of tough negotiations, the leaders of four Dutch parties agreed Monday on a draft program for a new center-right coalition government under Prime Minister Mark Rutte that will likely push policies further to the right.

Centrist D66 leader Alexander Pechtold said that after years of austerity, the new government will reward voters with lower taxes.

"We are coming out of crisis, so we can invest, taxes can be lowered," Pechtold told reporters.

Rutte is expected to officially unveil the program on Tuesday along with the leaders of the Christian Democrats, the D66 party and a faith-based party, the Christian Union.

The leaders spent a final morning checking the agreement before heading to their parliamentary offices to present it to their parties' lawmakers, who could still suggest minor amendments.

The March 15 election gave the coalition a narrow one-seat majority in the 150-seat lower house of the Dutch parliament and ended Rutte's alliance with the center-left Labor Party.

"I am very happy," said Rutte, who is in line to form his third ruling coalition. "Precisely on the day that this (government) formation is overtaking the longest previous formation we have ... a negotiators' agreement."

The four parties' negotiators attempted to hammer out an agreement that will offer something to all of their lawmakers.

"That is why we spent a lot of time on the content and I think that's the reason that it's a solid deal," said Pechtold.

Once the deal has been formally presented, Rutte will have to begin appointing ministers to his new administration. The coalition is expected to be finalized and sworn in later this month by the Dutch king.

Dutch voters went to the polls on March 15 this year but no single party gained enough support to form a government.

Parties need at least 76 seats in the 150-seat parliament to govern. Based on March's results, a minimum of four parties need to come together to form a government.

The Christian Democratic Appeal and the Democrats 66 both have 19 lawmakers, while the Socialist Party and the Green Left have 14 seats each.

There are a range of minor parties also represented -- including the Denk (Think) party which is backed by many Turks in the Netherlands.

Denk -- formed in 2015 by ethnic Turkish lawmakers Tunahan Kuzu and Selçuk Öztürk after their expulsion from the Labor Party, whose integration policy they opposed -- attracted over 200,000 votes not just from expatriate Turks, but from people from various backgrounds opposing discrimination and racism.

The coalition talks have been complicated by the fact no party wants to cooperate with the far-right PVV, headed by controversial anti-Islam campaigner Geert Wilders.

The March result was a disappointment for Geert Wilders' PVV, which had been ahead in opinion polls in the weeks leading up to the vote but saw its lead evaporate.