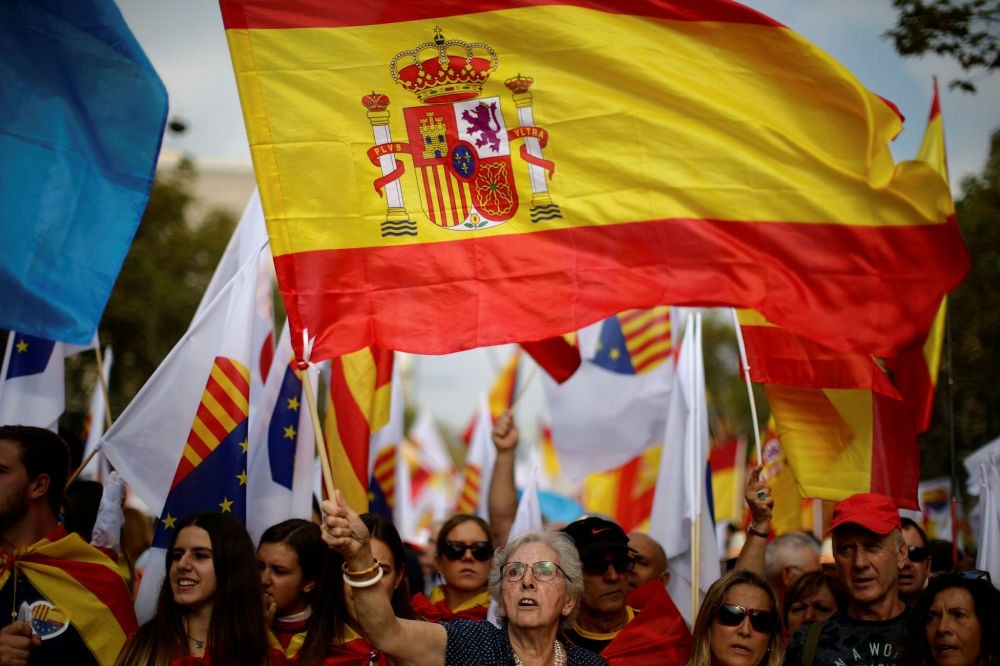 A woman waves a Spanish flag while celebrating the country's national day in Barcelona, Oct. 12.
by Compiled from Wire Services Oct 13, 2017 12:00 am

Spain celebrated its national day with a show of unity in the face of Catalan independence efforts, a day after the central government gave the region's separatist leader a deadline to abandon his secession bid

Thousands of Catalans who want their region to remain in Spain marked the country's national day yesterday, marching through Barcelona waving both Spanish and Catalan flags and shouting "I am Spanish," as the region's threats of independence have left the country in crisis.

But events were overshadowed by the crash of a Eurofighter jet, which went down on its route back to base after taking part in the display, killing its pilot. Separate pro-unity rallies, including one by members of a far-right movement, were organized in the Catalan capital Barcelona.

The slogan of the march was "Catalonia yes. Spain, too," supporting autonomy for Catalonia, but within Spain as a whole. The protesters booed when passing groups of regional police, who are seen by the unionists as having done too little to stop separatist efforts to stage an independence referendum on Oct. 1.

Spain is waiting for a response to a government request to Catalonia's leader to clarify by Monday if he has already declared independence. If so, Spain warns it may apply Article 155 of its Constitution and begin taking full or partial control of the region.

Rajoy has vowed to do everything in his power to prevent Catalan secession. His government says it is ready to take control of the region after Catalan president Carles Puigdemont's announcement Tuesday that he accepted a mandate for "Catalonia to become an independent state." But he quickly asked regional lawmakers to suspend it to allow for dialogue with Madrid.

Rajoy responded that Puigdemont had until next Monday to decide if he planned to push ahead with secession and then until next Thursday to reconsider, otherwise Madrid would trigger constitutional steps that could suspend Catalonia's regional autonomy.

Regional leaders were invited to attend the Madrid parade but for many years officials from the Basque and Catalan regions, where independence sentiment runs high, have boycotted it. Several town halls in Catalonia have said they would ignore the holiday and work as normal.

About 2.3 million Catalans, 43 percent of the region's electorate voted in the independence referendum. Catalonia said 90 percent favored secession and it declared the results valid. Opponents boycotted the vote. Polls indicate that Catalonia's 7.5 million residents are evenly divided over secession. The region contributes a fifth of Spain's 1.1 trillion-euro ($1.3 trillion) economy.