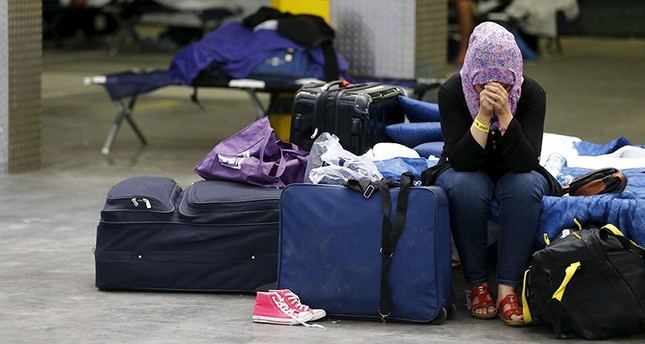 A Syrian woman cries as she sits on a folding bed in a former newspaper printing house used as a refugee registration centre for the German state of Hesse in Neu-Isenburg, on the outskirts of Frankfurt, Germany, September 11, 2015. (Reuters Photo)

The social workers claimed that the "pimp network" at refugee shelters in capital Berlin was also targeting minors.

Security guards at these institutions would reportedly make the first contact with their targets, who are mostly male asylum seekers.

A 20-year-old rejected asylum seeker confessed to German media that he was approached by a German security guard and offered 30-40 euros for sexual intercourse.

The Afghan refugee said he had to make money to survive, adding that he was "ashamed of what I am doing."

The suspicion of organized prostitution has been taken very seriously by the Senate Administration for Integration, Labor and Social Affairs, a spokesperson said Wednesday, commenting on the newly emerged allegations.

Berlin authorities have long been under pressure regarding the housing of refugees. The refugee management of the State Office for Health and Social Affairs was considered chaotic in 2015. A refugee boy had been previously kidnapped and later found murdered, while other criminal offenses were also observed.

The Senate administration underlined that it took action against the allegations of organized prostitution at a Berlin emergency shelter for refugees, adding that meetings were held with the shelter management, security services, honorary officials and local representatives for refugee affairs.

"There is currently no evidence of organized prostitution in the accommodation," the spokesperson said.

The social workers of the shelter in question were "sensitized" to recognize signs of abuse or prostitution. Flyers from help associations were distributed, while further training for employees have been planned so that they will be able to identify such dangers in a more targeted way in the future.

Share on Facebook Share on Twitter
Previous in Europe Berlin police say they've confiscated weapons and a large quantity... Next in Europe A group of journalists behind the Panama Papers offshore accounts...
DAILY SABAH RECOMMENDS