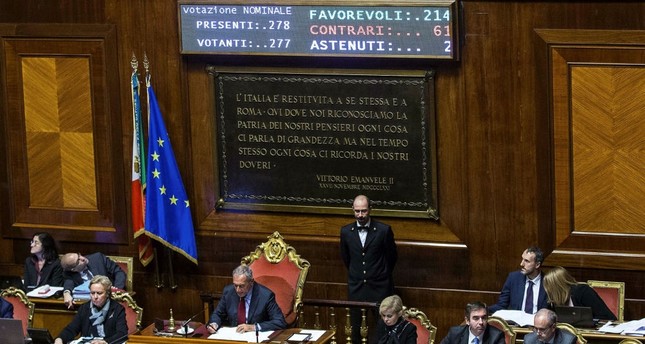 President of the Italian Senate, Piero Grasso presides over the final vote of the new electoral law in Rome, Oct. 26.

The Italian government adopted a new electoral law that is set to favor mainstream parties, eliminating the far-right 5-Star Movement from the 2018 general elections

Italy's upper house Senate approved yesterday a new electoral system that is expected to handicap the far-right 5-Star Movement (M5S) at a forthcoming national election and favor mainstream political blocs. The new law, which looks likely to land Italy with yet another coalition government at the national elections due between March and May, was adopted by the Senate by 214 votes in favor to 61 against.

Furious M5S members have protested from parliament benches and in the piazzas of central Rome this week.

As individual parties, the ruling center-left Democratic Party (PD) and anti-establishment M5S are currently running neck and neck in the polls, with the center-right Go Italy (FI) and anti-immigrant Northern League dragging their feet. But polls indicate that no single party would snap up enough ballots under the new system, a combination of proportional representation and first-past-the-post, without forming a coalition.

While a divided left may flounder, a FI and League partnership is expected to leapfrog into first place. The M5S on the other hand, which has vowed never to join forces with traditional parties, would be out of the race. The new system had the backing of the PD, FI, League and the small center-right Popular Area (AP).

Italy has had 64 governments since the end of World War II, including five in the past seven years, and a renewed bout of political instability in the eurozone's third largest economy could hurt global financial markets. To prevent a financial backlash, analysts say some form of grand coalition between the more moderate parties on the left and right is likely to emerge from any ballot-box stalemate.

"You are all the same. You don't have any ideas or any policies, just the same mission: To keep hold of your seats and continue to squeeze the country dry," 5-Star Senate leader Giovanni Endrissi told the upper chamber yesterday.

President Sergio Mattarella had called on parliament to draw up a new law to harmonize the existing voting rules that risked throwing up different results in the two houses.

This will be Italy's third electoral law since 1993 and gives political leaders the power to pack electoral lists with supporters, potentially stifling internal party debate.

The first-past-the-post element will benefit parties that have a strong local base, notably the Northern League, which looks set to win a large majority of seats in the wealthy north.

Approval of the electoral law leaves parliament with one final task to complete before the houses can be dissolved, the reading of the 2018 budget.

Small leftist groups, angered by the electoral law which could crimp their numbers in the next legislature, have said they will no longer support Prime Minister Paolo Gentiloni, meaning he could struggle to win backing for the budget.

Share on Facebook Share on Twitter
Previous in Europe The potential partners in Germany's next government started to tackle... Next in Europe Russia conducted several ballistic missile tests on Thursday from...
DAILY SABAH RECOMMENDS