May sets exact time for UK's withdrawal from the EU 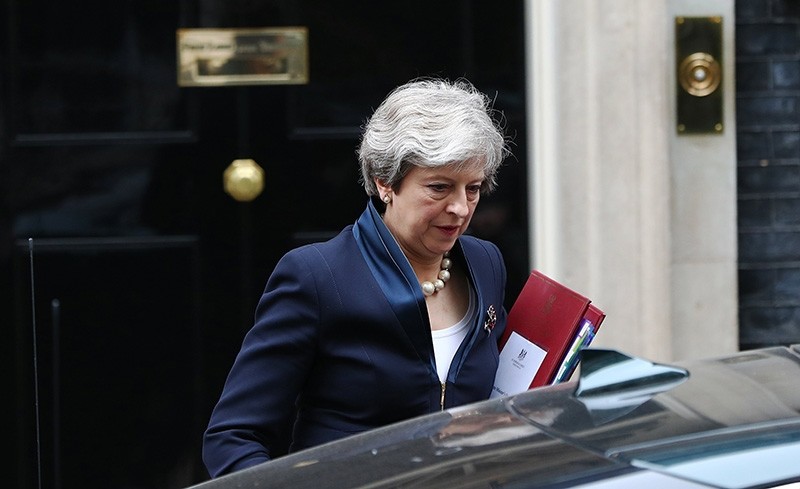 Following a chaotic week in which British Prime Minister May lost two ministers in separate scandals, she set an exact time for Brexit to re-impose her authority

British Prime Minister Theresa May on Friday set an exact time for the United Kingdom's withdrawal from the European Union. May set 11 p.m., March 29, 2019, as the precise hour Britain would end its 46-year membership in the union. Details will be set out in an amendment to the EU Withdrawal Bill that will be examined by lawmakers next week.

"Let no-one doubt our determination or question our resolve, Brexit is happening," May said. "It will be there in black and white on the front page of this historic piece of legislation: The United Kingdom will be leaving the EU on March 29, 2019, at 11 p.m. GMT," Anadolu Agency (AA) reported.

May warned pro-EU deputies that she will not tolerate efforts to block Brexit through parliamentary maneuvers in a column in Friday's Daily Telegraph, as reported by the French Press Agency (AFP).

As Brexit talks resumed in Brussels, May sought to re-impose her authority over potential rebels following a chaotic week in which she lost two ministers in separate scandals.

Crucial legislation to put existing EU regulations on the domestic statute book to avoid legal chaos after Brexit is currently working its way through parliament with many amendments already lodged.

"The EU Withdrawal Bill is the single most significant piece of legislation in this parliament because it is fundamental to delivering a smooth and orderly Brexit," May wrote. "Where MPs think they can improve the Bill, this government will listen to them.

"But we will not tolerate attempts from any quarter to use the process of amendments to this bill as a mechanism to try to block the democratic wishes of the British people by attempting to slow down or stop our departure from the European Union."

Meanwhile, the former British ambassador to the European Union who helped author Article 50, the EU's legal mechanism for withdrawal, insisted Friday that the process could still be reversed.

"We can change our minds at any stage of the process," John Kerr said at a London event hosted by the pro-EU Open Britain, adding: "Actually, the country still has a free choice about whether to proceed. As new facts emerge, people are entitled to take a different view. And there's nothing in Article 50 to stop them."

Thus far, there are few signs of a change of heart on Brexit in opinion polls. Both May's Conservatives and the opposition Labour now explicitly support leaving the EU, which Britain joined in 1973.

So far, talks have made only incremental progress on citizens' rights, a financial settlement and the Irish border, issues that the European Union wants to make more headway on, before negotiations on a future relationship, especially regarding trade, can begin.

The diplomat said that the deadline was necessary for the EU side to make sure that the 27 countries have enough time to agree on the text of the decision so that it can be adopted by EU leaders during a summit scheduled for Dec. 14-15.

At the same time, various media outlets in Britain and Ireland reported that the EU has raised with Britain the possibility of Northern Ireland being given special status and remaining in the customs union and single market after Brexit.

EU diplomats said such a status would be in line with the Northern Irish government's position as well as a resolution by the European Parliament, which needs to approve any final agreement between the EU and Britain.

While a special status for Northern Ireland would avoid a hard border for the island of Ireland, it is politically contentious in Britain where May has ruled out remaining in the customs union and the single market. Both sides met for the sixth time this week.

Britain, a member of the EU since 1973, is the first country ever to begin procedures for leaving the bloc after a divisive referendum that took place on June 23, 2016.