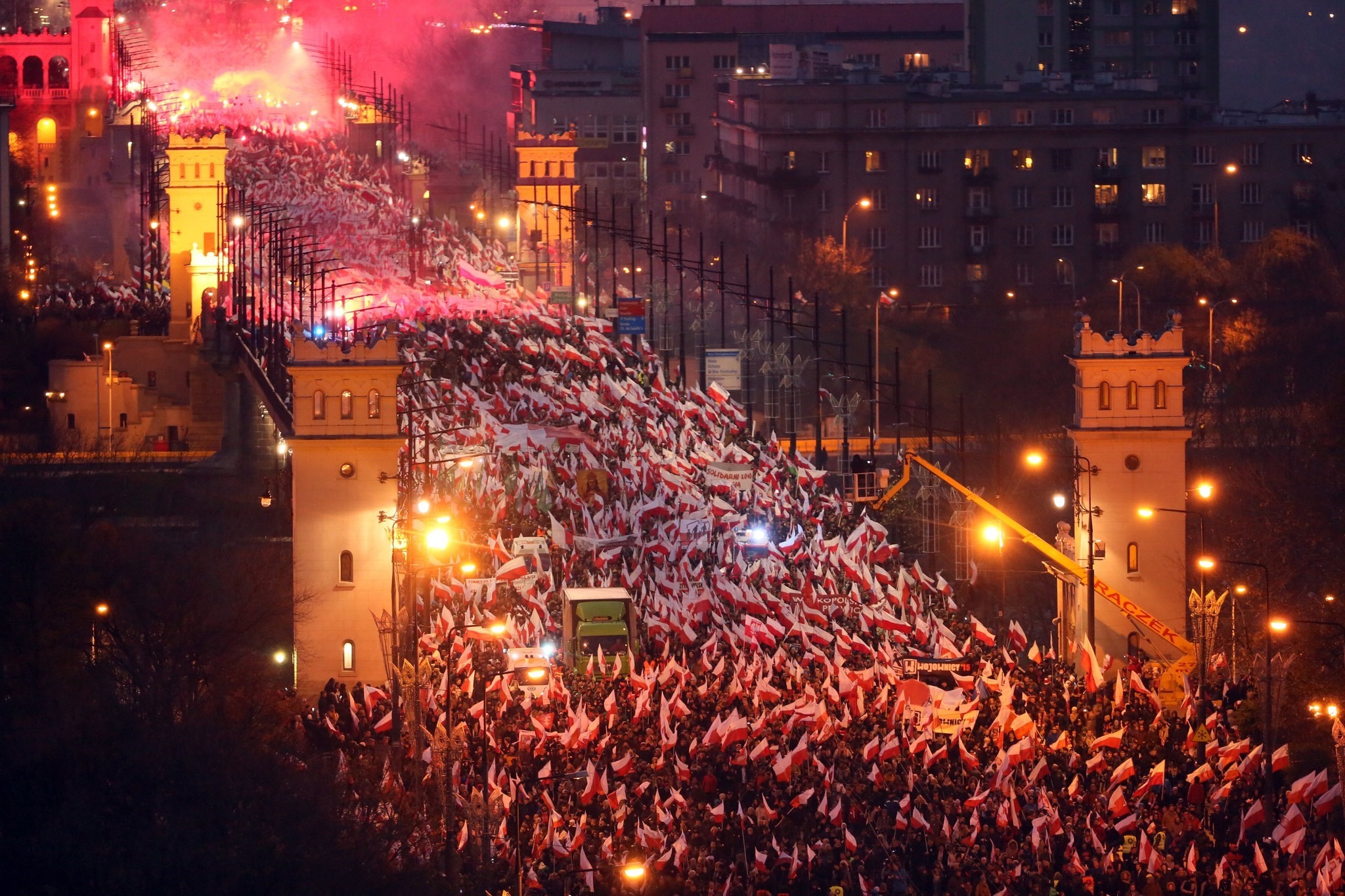 Polish nationalists walk through the Poniatowski Bridge as they take part in the March of Independence 2017 under the slogan 'We want God' as part of Polish Independence Day celebrations in Warsaw, Poland, 11 November 2017. (EPA Photo)
by Associated Press
Nov 11, 2017 12:00 am

Thousands of nationalists marched in a demonstration organized by far-right groups in Warsaw Saturday, as Poles celebrated their country's Independence Day.

The far-right march was one of many events marking Poland's rebirth as a nation in 1918 after being wiped off the map for 123 years. Earlier in the day, President Andrzej Duda presided over state ceremonies also attended by European Union president Donald Tusk, a former Polish prime minister.

But the march has become the largest Independence Day event in recent years, overshadowing official state observances and other patriotic events. Some participants expressed sympathy for xenophobic or white supremacist ideas, with one banner reading, "White Europe of brotherly nations." A participant who was interviewed on state television station TVP said he was taking part "to remove Jewry from power."

Participants marched under the slogan "We Want God," words from an old Polish religious song that President Donald Trump quoted from during a visit to Warsaw earlier this year. Speakers spoke of standing against liberals and defending Christianity.

Many carried the national white-and-red flag as others set off flares and firecrackers. Some also carried banners depicting a falanga, a far-right symbol dating to the 1930s.

A smaller counter-protest by an anti-fascist movement also took place. Organizers were keeping the two groups apart to prevent violence.

Independence Day marks Poland regaining its sovereignty at the end of World War I after being partitioned and ruled since the late 18th century by Russia, Prussia and the Austro-Hungarian Empire.

Duda oversaw ceremonies at the Tomb of the Unknown Soldier, walking past a military guard before the raising of the flags and cannon salutes. After delivering a speech he took part in a wreath-laying ceremony, praying and crossing himself at the monument to all unknown soldiers killed fighting for the country.

Tusk, who attended at Duda's invitation, also paid his respects at the monument.

Ruling party leader Jaroslaw Kaczynski noted that Poland had not always been fully independent since 1918, a reference to Germany's occupation during World War II and the decades spent under Moscow's direction during the Cold War.

Still, he said: "The Polish state was internationally recognized the whole time and that is a great achievement."