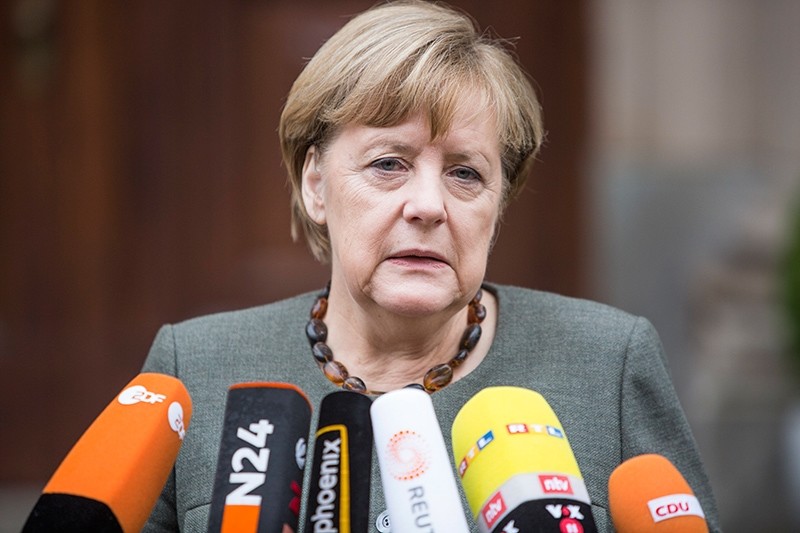 German Chancellor Angela Merkel, makes a statement to members of the press outside the German Parliamentary Society offices prior to a final session of exploratory talks of four political parties, Berlin, Germany, Nov. 16, 2017. (EPA Photo)
by Compiled from Wire Services Nov 16, 2017 12:00 am

Chancellor Angela Merkel warned that "serious differences" remain between the parties hoping to form Germany's next government but voiced hope a deal would emerge Thursday, hours before a deadline that could trigger snap polls.

We have "very different positions" on some policy issues, Merkel told reporters, adding however that "I believe it can work."

After weeks of quarrelsome exploratory talks, Merkel's Christian Democrats (CDU) and Christian Social Union (CSU) bloc, the pro-business Free Democrats (FDP) and the left-leaning Greens are holding a final day of negotiations before announcing whether they have found enough common ground to begin formal coalition negotiations.

The awkward bedfellows, who differ on everything from refugees to climate protection and EU reforms, have been pushed together by September's inconclusive election, which left Merkel badly weakened as the far-right Alternative for Germany (AfD) lured millions of voters.

The stakes are especially high for Merkel, eyeing a fourth term, who set the Thursday deadline to reach an agreement in principle with the goal of having a new government in place by Christmas.

However, these talks are just the first stage in attempting to build the nation's first three-way national coalition.

If successful, formal coalition negotiations for a new government headed up by Merkel's CDU and its Bavarian CSU allies will then begin.

Merkel has been forced to try to cobble together a new so-called Jamaican coalition after her current allies, the center-left Social Democrats (SPD), ruled out joining a new CDU-led coalition and opted to return to opposition following September elections.

The potential alliance derives its Caribbean nickname from the party colors of three groups involved, which are the same as those of the Jamaican flag.

"Today is the day when we must place ourselves in the situation of the other and ask what is important for them," Merkel said, calling on all involved to make the necessary compromises.