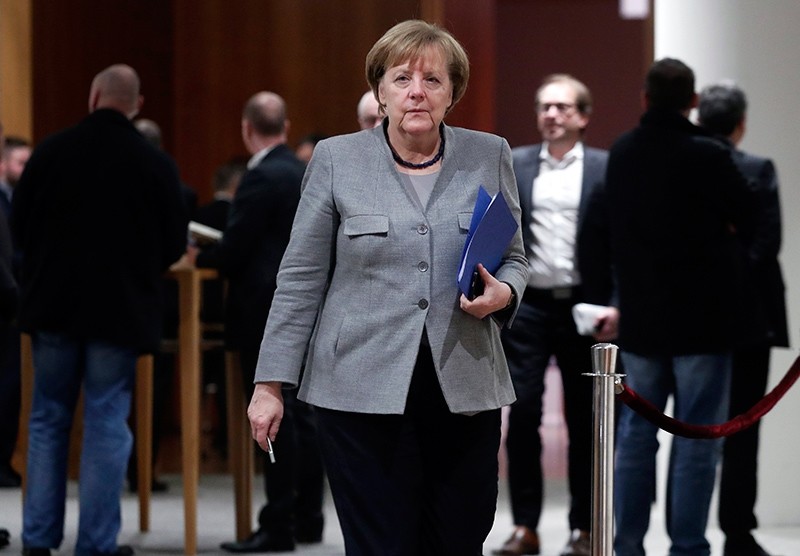 German Chancellor Angela Merkel during a break in the exploratory talks of four political parties in the Representative Office of the State Baden-Wuerttemberg, Berlin, Germany, Nov. 19, 2017. (EPA Photo)
by Compiled from Wire Services Nov 20, 2017 12:00 am

German Chancellor Angela Merkel pledged early Monday to maintain stability after the Free Democratic Party (FDP) pulled out of talks on forming a new government with her conservative bloc and the left-leaning Greens, raising the possibility of new elections.

Merkel told reporters that the parties had been close to reaching a consensus on how to proceed with formal coalition talks but that the Free Democrats decided abruptly to pull out just before midnight Sunday — a move she said she respected, but found "regrettable."

She said she would consult with Germany's president later in the day to brief him on the negotiations and discuss what comes next.

Without bringing the Free Democrats back to the table, Merkel will be forced to try to continue her current governing coalition with the Social Democrats, although that center-left party has said it will not do so, or she could try to form a minority government, which was seen as unlikely. Otherwise Germany will have to hold new elections.

"It is at least a day of deep reflection on how to go forward in Germany," Merkel said. "But I will do everything possible to ensure that this country will be well led through these difficult weeks."

Merkel's conservative Christian Democrats (CDU) and sister Bavaria-only Christian Social Union (CSU), the pro-business Free Democrats and the left-leaning Greens had already blown past Merkel's own deadline of Thursday to agree on a basis for opening formal negotiations on a coalition of all four parties, a configuration that has never been tried at a national level in Germany.

Key sticking points were the issues of migration and climate change.

Among other things the Greens were pushing for Germany to end its use of coal and combustion engines by 2030, though they had signaled they were open to some compromise.

The other parties are also committed to reducing carbon emissions, but Merkel's bloc hadn't put a date on when to phase out coal. The Free Democrats also expressed concern about what the moves would mean for jobs and Germany's economic competitiveness.

On migration, the Christian Social Union wanted an annual cap on refugees, while the Greens sought to allow more categories of recent migrants to bring their closest relatives to join them.

Merkel said that "we thought we were on a path where we could have reached agreement," when that the Free Democrats decided to pull out.

Free Democrat leader Christian Lindner told reporters that his party decided to withdraw rather than further compromise its principles and sign on to policies the party was not convinced of.

"It is better not to govern, than to govern falsely," he said.

Greens politician Reinhard Buetikofer criticized Lindner's decision, saying on Twitter that the Free Democrat had chosen "a kind of populist agitation instead of governmental responsibility."

Looking ahead, if it comes to a new election, polls currently suggest it would produce a very similar parliament to the current one, which would make efforts to form a new government similarly difficult.

Though Merkel could also abandon the Free Democrats and the Greens and instead form a coalition with the center-left Social Democrats, her current partners in the outgoing government, the Social Democrats have been adamant about going into opposition following its disastrous result in the Sept. 24 election.

Party leader Martin Schulz as recently as Sunday again ruled out the possibility of pairing up with Merkel's bloc to form a new government.

Meanwhile, the euro hit a two-month low against the yen on Monday, as German coalition talks failed, stoking political uncertainty in the euro zone's largest economy.

The euro slid broadly in early Asian trade after the break down of the German coalition talks, but later pared some of its losses.

Merkel's conservative bloc, which won the largest proportion of votes in the September election, will probably be able to form a minority government, said Steven Dooley, currency strategist for Western Union Business Solutions in Melbourne.

"They'll be able to rule in a minority government. It just makes things a little bit more awkward for them but I don't think it's really a massive game-changer," Dooley said.

The euro's retreat helped support the dollar against a basket of six major currencies, with the dollar index edging up 0.3 percent to 93.968.