Merkel calls for solidarity among EU states regarding migrant crisis 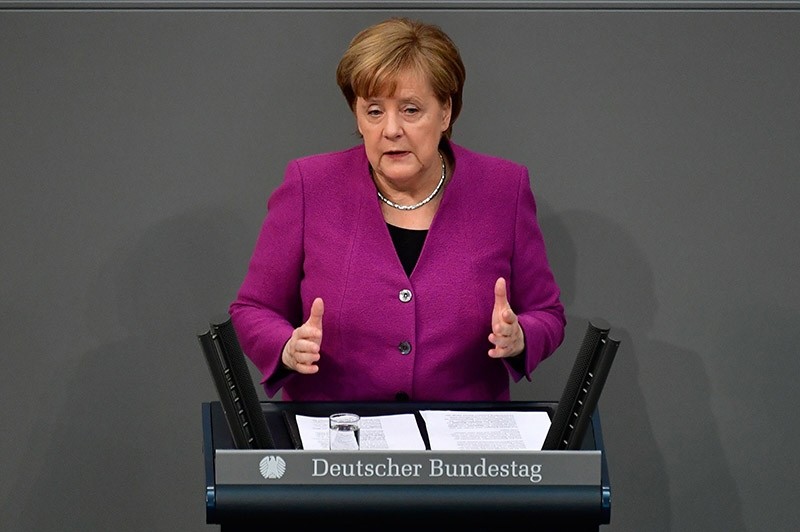 German Chancellor Angela Merkel gives a speech at the Bundestag (lower house of parliament) on February 22, 2018 in Berlin. (AFP Photo)
by Associated Press Feb 22, 2018 12:00 am

German Chancellor Angela Merkel pressed European member states Thursday to do their share in helping to deal with the large influx of migrants, work together to strengthen external borders and fight the problems causing people to flee their homelands.

Speaking to Parliament before a meeting with other EU leaders Friday in Brussels, Merkel stressed that countries need to remember that "solidarity is not a one-way street" — a statement that seemed to take aim at eastern European members who have benefited from EU funding, but have been resisting taking in refugees.

"It is up to all member states never to lose sight of their responsibility for the whole," she said, without naming any individual nations. "And that, of course, includes safeguarding our common European values on which the European Union was established."

Germany took in by far the largest number of migrants since 2015. Hungary, Poland and the Czech Republic are being sued by the European Commission for refusing to accept their share.

Merkel says EU leaders need to agree upon a fair quota system for taking in asylum-seekers, saying that the goal is to have "significant steps" concluded by June. She said she would approach the negotiations with "tenacity and patience."

She said Germany also plans to become more engaged in European matters overall, noting that her conservative bloc's coalition agreement with the Social Democrats — who still need to approve it before a new government is formed — stresses the importance of Europe.

"Germany can only do well in the long term when Europe does also," she said.

Among other issues she said Germany would push for the Brussels summit was how to make the EU more competitive in China, resolving conflicts in places like Syria, Libya and Ukraine, and how to move ahead after Britain leaves the trade bloc.

"First, I'm convinced the world will not wait on us, neither on us in Germany nor us in Europe," she said. "And second, we need more European answers to the most pressing questions of our time."