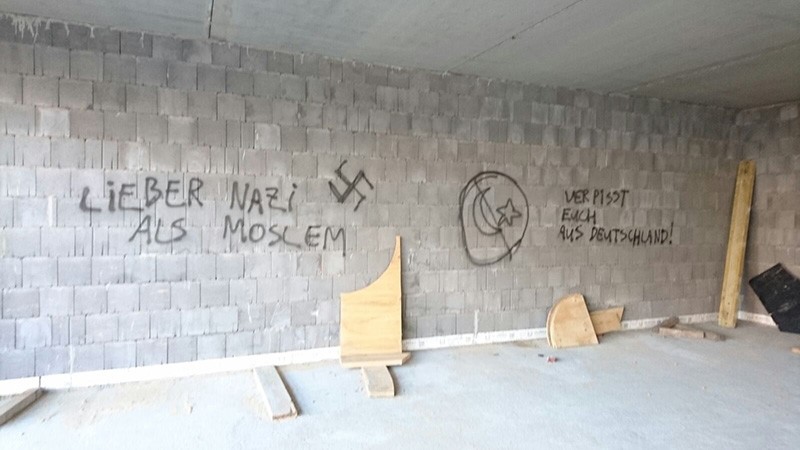 This file photo dated July 7, 2016 shows neo-Nazi slogans and a swastika sprayed on the walls of a Turkish-Islamic Union for Religious Affairs (DITIB) mosque under construction in Herringen, North-Rhine Westphalia, Germany. (AA Photo)
by Compiled from Wire Services Mar 03, 2018 12:00 am

At least 33 people were injured in the attacks, almost all of which were carried out by people on the extreme-right, according to the figures, which were provided after a request from the Left Party.

Almost 60 incidents involved attacks or damage inflicted on mosques and other Islamic institutions, including the smearing of pig's blood on buildings.

The crimes recorded included the incitement of hatred against Muslims, threatening letters, attacks on women wearing headscarves, and Nazi-themed graffiti sprayed on mosques and other buildings.

The German government has only collected data on anti-Muslim attacks since the beginning of last year, so there is no comparable data for 2016.

Aiman Mazyek, chair of the Central Council of Muslims in Germany, told the newspaper he was sure that the crimes recorded did not represent all those committed against Muslims.

Germany, a country of 81.8 million people, has the second largest Muslim population in Western Europe after France.

Among the country's nearly 4.7 million Muslims, 3 million are of Turkish origin. Many of them are second or third-generations of Turkish families who migrated to Germany in the 1960s and are well-integrated.

The EU's largest economy has witnessed growing Islamophobia and hatred of migrants in recent years triggered by propaganda from far-right and populist parties, which have exploited fears over the refugee crisis and terrorism.