France to cut number of lawmakers by almost a third 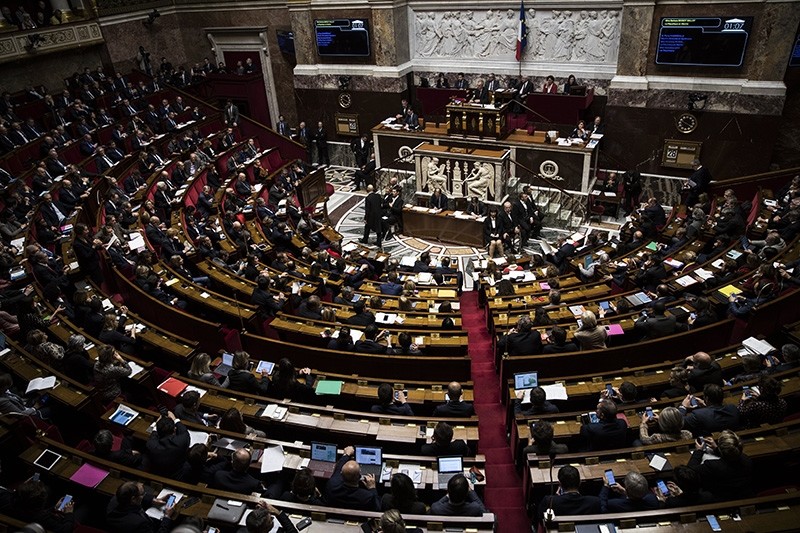 A file picture dated 28 November 2017 shows French members of the Parliament questioning the government in Paris, France, prior to their vote to ratify the ordinances of the government regarding the labor law. (EPA Photo)
by Apr 04, 2018 12:00 am

France will cut the number of lawmakers by almost a third and introduce a degree of proportional representation for the next legislative elections, in a major reform aimed at restoring voters' confidence in a largely discredited political class.

The measures, broadly in line with President Emmanuel Macron's campaign promises, are the result of an agreement between his government and the head of the opposition-controlled Senate, whose support is essential to pass the reforms.

Macron's prime minister, Edouard Philippe, said the reforms, if approved by both houses of parliament, will speed up the lawmaking process and give more of a voice to groups currently under-represented in parliament.

"These bills will contribute to a deep renovation of political and parliamentary life, in a spirit of responsibility, representativity and efficiency," Philippe said.

The number of lawmakers - at both the lower house National Assembly and the Senate - will be cut by 30 percent, Philippe said.

The agreement, after weeks of negotiations with the head of the senate, spare Macron the need to call a referendum to pass the reforms.

Some 15 percent of lawmakers in the lower house, which has the last word on legislation, will be elected via proportional representation in the 2022 legislative elections, in a concession to Macron's centrist MoDem party ally.

The last time the proportional voting system was used, the far-right National Front won an unprecedented number of MPs.

Despite winning 13 percent of the vote in the last parliamentary elections in 2017 under France's current parliamentary system, the National Front gained only 8 seats in the 577-seat National Assembly.