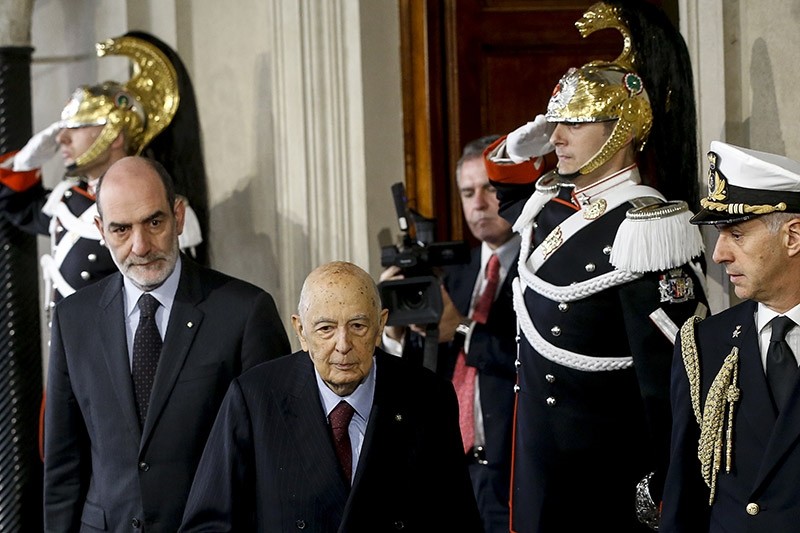 President Emeritus of Italy Giorgio Napolitano leaves after a meeting with Italy's President Sergio Mattarella, on the first day of consultations with political parties, on April 4, 2018 at the Quirinale palace in Rome. (AFP Photo)
by Compiled from Wire Services Apr 04, 2018 12:00 am

Italian President Sergio Mattarella opened two days of formal consultations Wednesday to determine if any party or coalition can muster support to form a government after the country's inconclusive March 4 elections. Consultations started with the parliament speakers followed by minor parties, and will continue tomorrow with those who won the most votes and whose positions will carry the most weight in the talks.

Despite agreeing last week on the nomination of the speakers in parliament, the anti-migrant Northern League and the Five Star Movement (M5S) have not budged publicly on their demands to be allowed to govern.

The populist M5S was the single party with the highest number of votes, at 32 percent, while the center-right coalition led by the anti-migrant Northern League, including former Prime Minister Silvio Berlusconi's Forza Italia, won 37 percent. Neither of the two leading forces can govern alone and no clear path to a coalition deal has emerged in the weeks since the elections.

The leader of the M5S, Luigi di Maio, stepped up the rhetoric in the lead-up to Mattarella's series of consultations. Di Maio said on television Tuesday that he would only deal with either the Northern League or the center-left Democratic Party (PD), which leads the outgoing government and suffered a collapse in the election.

He said any deal with Matteo Salvini's Northern League must exclude media magnate Berlusconi's Forza Italia, the second-largest party in the right-wing coalition and a fierce rival of the M5S.

"Salvini needs to choose between revolution and the restoration. Whether to leave Berlusconi and change Italy or whether to stay with him and not change anything," said Di Maio, as reported by Agence France-Presse (AFP).

The PD has said that it intends to remain in the opposition while Berlusconi's party has said it would not consider a government with the M5S.

If Mattarella does not see conditions for a government emerging from the first round of talks, he is likely to schedule another round as soon as next week. While an impasse could lead to new elections, most analysts believe no party is eager to return to the ballot, leading instead to a softening of positions. If Mattarella were to announce new elections, a new electoral law might be needed to ensure a decisive outcome.

Finding a solution this week will be tricky given how far any group is from a majority in either the lower house Chamber or upper house Senate. The right needs 51 more seats in the 630-seat Chamber and 23 in the Senate, as it needs holds 318 seats in order to form a stable majority. The M5S needs to secure the support of 94 more in the lower house and 51 in the upper house. The PD has refused to work with either the right or M5S despite having enough seats, 111 in the Chamber and 52 in the Senate, to form a government with either.