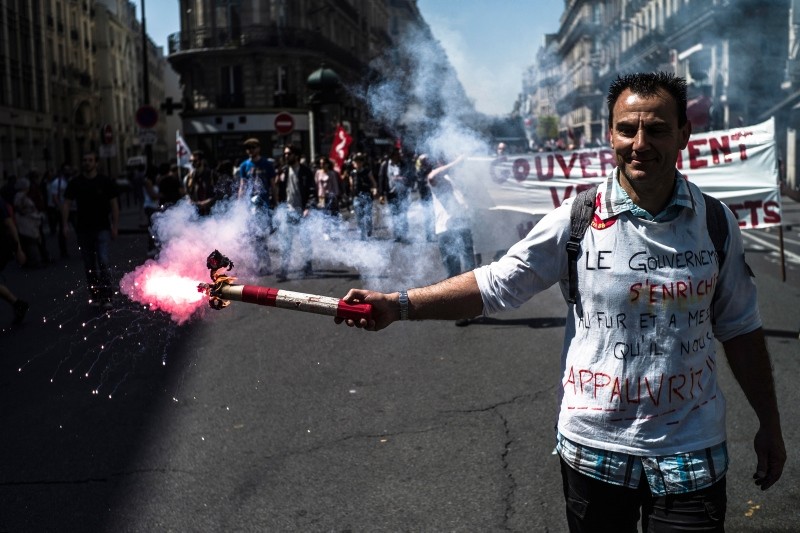 A protester lights a flare during a demonstration titled 'La fete a Macron' (Macron's party) against the policies of French President Emmanuel Macron (EPA Photo)
by May 05, 2018 12:00 am

Depicting the object of their ire as Napoleon, Dracula, Jupiter, a banker-king and Margaret Thatcher, tens of thousands marched through central Paris Saturday to protest against President Emmanuel Macron's sweeping reforms, a year after he took office.

Some 2,000 security forces including riot police were deployed just in case a generally good-natured rally went the same way as May Day protests hijacked by anarchists.

Marchers gathered from midday in warm early summer sunshine in the central Opera square for a protest dubbed a "Party for Macron," a tongue-in-cheek "celebration" of the 40-year-old centrist and former Rothschild banker's first anniversary in power.

"It was not the huge influx that they had predicted," Interior Minister Gerard Collomb said, denouncing what he called an "attack" on an outside broadcast van of Franceinfo radio in the eastern quarter of Bastille, where the march ended.

One of its windows was smashed and a smoke bomb was thrown into the vehicle.

"Luckily no journalist was inside when the smoke bomb was thrown," Collomb said.

Smaller rallies took place in the southern cities of Toulouse and Bordeaux while the Paris one kicked off with a mass picnic which drew numerous families.

Organizers had urged participants to attend in a party mood -- but the high security owed much to hundreds of black-clad youths having torched cars and a McDonald's restaurant during traditional May 1 demonstrations in the capital, prompting fears that more "black bloc" protesters could hijack Saturday's event.

One protester held aloft a placard with the words "Mac-ron is disgusting," a play on words to show his feelings about the president and the fast food chain.

He noted that the protest's name, the "Fete a Macron," can have a double meaning in French -- either celebrating someone or trying to do them harm.

Some supporters of the left-wing populist La France Insoumise party (LFI) brandished anti-Macron banners with slogans including "down with the president of the rich," "no to a social coup" and "for a Sixth Republic."

The protest is the latest in a series of large street demonstrations against Macron, whose overhauls of everything from the education system to the state rail operator have been causing friction with various groups.

It was organized by firebrand LFI lawmaker Francois Ruffin and other ex-members of the Nuit Debout (Up All Night) leftist movement that staged nocturnal rallies across France in 2016.

Ruffin told AFP this week that Macron may have won a democratic election last May but "democracy does not mean shutting up for five years."

"People have the right to challenge him," said Ruffin, a journalist whose documentary "Merci Patron," about a poor couple who take on France's richest man, captured an angry zeitgeist and filled cinemas in 2015.

Friday marked the latest in a series of rail strikes as train drivers and other staff took a stand against Macron's overhaul of the SNCF, aimed at reducing its massive debts and making it more competitive.

Many French leftists have called for Macron's opponents, from students to striking rail workers, to join forces in a re-run of the massive May 1968 protest movement that shook France exactly half a century ago.

Addressing supporters from a bus bearing the slogan "when everything is privatized we shall be deprived of everything," he warned Macron many people were sickened by "endless gifts for the rich (given) the difficulty of the French people to make ends meet."

Melenchon said Saturday was just the "first stage" of protests, announcing a new rally May 26 and exhorting people to "turn up in their millions to become a human sea that will change history."