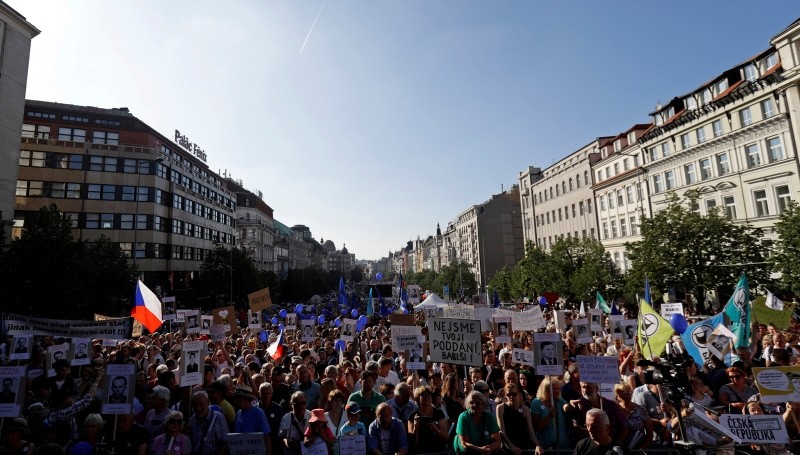 Thousands of Czechs rallied in the capital of Prague and elsewhere in the EU country to protest acting Prime Minister Andrej Babis because he is under investigation for fraud and still plans to create a government supported by the maverick Communist Party.

Tuesday's rally at downtown Wenceslas Square takes place a day before President Milos Zeman is scheduled to again appoint Babis as prime minister. The centrist ANO (YES) movement led by populist billionaire Babis won a parliamentary election in October but his minority government lost a confidence vote in January and had to resign.

Babis is set to form a government with the Social Democrats that would govern with support from the Communists, which are poised to play a role in government, albeit an informal one, for the first time since communism fell in 1989.

The protesters are condemning Babis' plan and have called for his resignation.

With 78 seats in the 200-member parliament, Babis's ANO (YES) party is expected to formally partner with the 15-seat CSSD coalition and rely on the 15-seat KSCM communists to make up the rest.

"I read a lot about the communist era and I oppose communists returning," high school student Jana Homolkova told AFP on the sidelines of a rally organized by in the heart of Prague by the "Million moments for democracy" NGO.

Protesters noted that Zeman, a former communist who makes no secret of his pro-Russia and pro-China views, is due to tap Babis, also an ex-communist, but one who went on to amass a fortune as a food, chemicals and media tycoon.

"Tomorrow will be a tragic day for Czech democracy," said Jiri Pospisil, the leader of the rightwing party TOP 09 party in front of some 10,000 protesters in Prague, according to an estimate by AFP.

"Zeman and Babis, this country isn't yours!", "Stop the communist criminal ideology!", "No more communism!", were just some of the posters touted by protesters in Prague.

They also waved portraits of the estimated 4,500 victims of the former totalitarian regime before 1989.

Similar rallies were also held in no less than 200 Czech towns and villages.

"Andrej Babis ... has the right and also the duty, as an election winner, to negotiate the government," Zeman told Czech TV last week. "I will do this to speed up the process."

The KSCM communist party has signaled it will back him in a confidence vote this time around in exchange for positions in large state-owned enterprises.

It will thus have a key role, albeit informally, in forming the government for the first time since the 1989 Velvet Revolution led by Vaclav Havel that peacefully swept away communism in then Czechoslovakia.

Czechs are watching for signs of whether the Communists can influence foreign policy in return for supporting the coalition in parliament. However, Babis pushed through a mandate last week increasing Czech army deployments in the coming years, including to the Baltic states, which the Communist Party strongly opposed.

His position is also complicated by reports he collaborated with the former communist-era secret police.