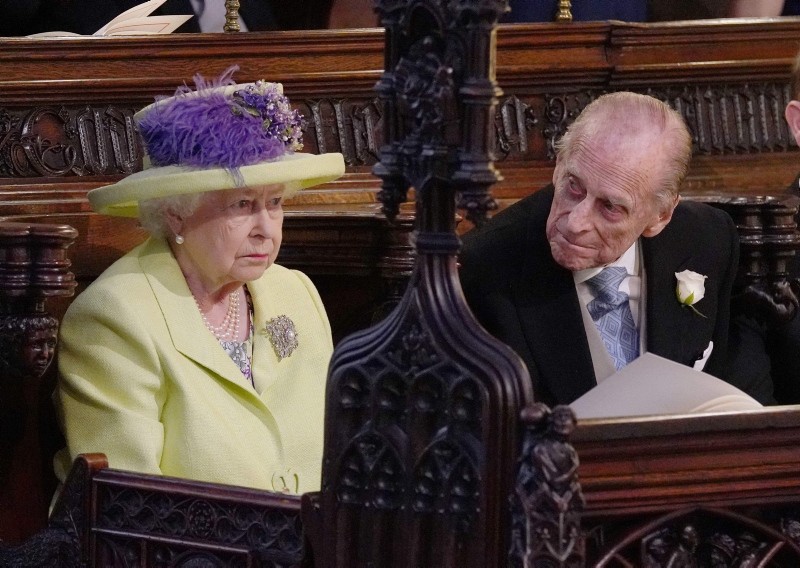 Britain's Queen Elizabeth II and Britain's Prince Philip, Duke of Edinburgh (R) during the wedding ceremony of Britain's Prince Harry, Duke of Sussex and US actress Meghan Markle in St George's Chapel in Windsor, on May 19, 2018. (AFP Photo)
by daily sabah
Jul 02, 2018 12:00 am

The news came a few days after the monarch announced that she would not be able to attend a public engagement due to sickness.

According to the Sunday Times, the exercise was called "Castle Dove" and involved high-ranking members of the British government, including Prime Minister Theresa May's deputy David Lidington. Various ministers came together with low-ranking civil servants for the first time to discuss the plan in detail in case of the death of Queen Elizabeth II.

The day after the monarch's death, also known as "D+1," requires a broad plan with routines for the mourning period and the royal succession.

The death of Queen Elizabeth II, who is currently 92 years old, will be reportedly conveyed to the BBC and the government with the code "London Bridge is down," the Guardian reported last year, adding that media outlets had already prepared plenty of coverage for such an incident.

The Guardian also previously claimed that the queen's body would remain in a "lie in state" in Westminster Hall so that the public could visit her to pay respects.

The monarch was expected to attend an event last Thursday at St Paul's Cathedral alongside Angelina Jolie; however, a palace spokesperson said that the queen was feeling "under the weather."

Despite the queen's increasing age, she still has quite a busy list of events to attend. She carried out almost 300 engagements in 2017 alone, the Daily Mail said Monday.