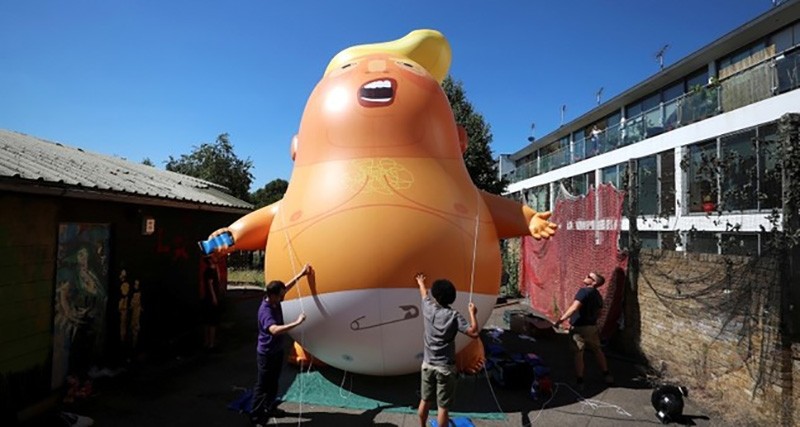 A snarling, orange baby blimp impression of Donald Trump has been approved by the mayor of London to float over the city during the U.S. president's visit next week.

The blimp – an impersonation of a fussy baby version of Trump, complete with cellphone in hand – will be tethered 30 meters (98 feet) high near the Parliament building between 9:30 a.m. and 11:30 a.m. local time on Friday, July 13, at the same time as a scheduled march in central London called "Stop Trump."

"The Mayor supports the right to peaceful protest and understands that this can take many different forms. His city operations team have met with the organizers and have given them permission to use Parliament Square Garden as a grounding point for the blimp," a spokesperson for the mayor said.

Leo Murray, the British activist behind the blimp, reacted happily to the announcement, telling Sky News: "Following a huge groundswell of public support for our plan, it looks like City Hall has rediscovered its sense of humor. Trump Baby will fly!"

Murray said the activist group "didn't get off to the best start with the mayor's office," who reportedly initially didn't recognize the float as a "legitimate" form of protest.

While Khan himself didn't sign the petition, the opinions he's shared about the U.S. president would suggest he supports his fellow Londoners.

Khan has been an outspoken opponent of Trump, saying in January that Londoners "have made it clear that Donald Trump is not welcome here," after the president testily canceled a trip to the U.K.

He wrote on Twitter that although Londoners admire the U.S., they "find his policies and actions the polar opposite of our city's values of inclusion, diversity, and tolerance."

Demonstrators still need to receive approval from the Metropolitan Police and National Air Traffic Service before liftoff next Friday.

Inspired by the overwhelming show of support on Crowdfunding, Murray says the blimp is headed for a "world tour" after London.