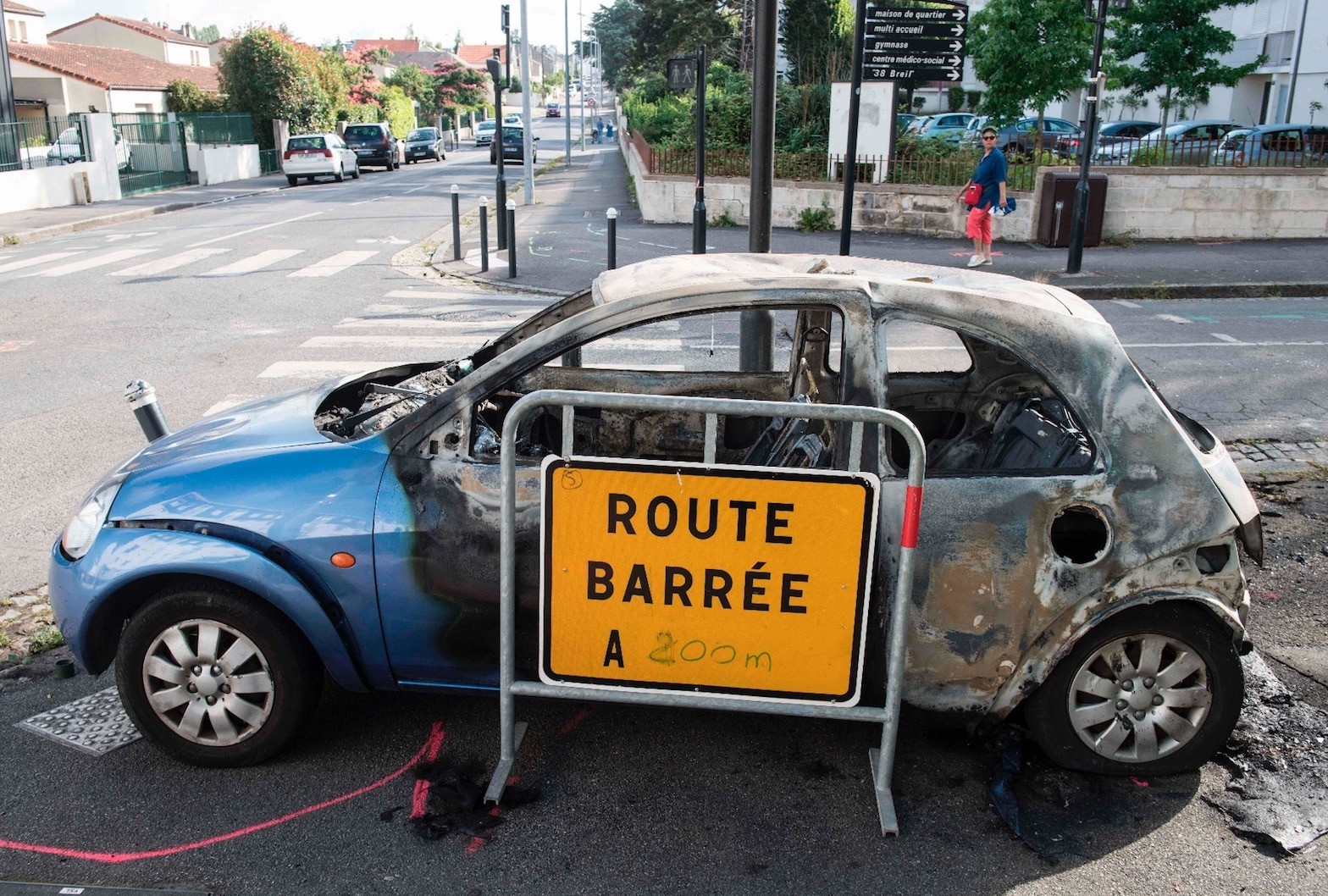 A burned car following clashes between groups of young people and the police in the Breil neighborhood of Nantes, July 4.
by Compiled from Wire Services
Jul 05, 2018 12:00 am

Riots broke out in yesterday morning in the city of Nantes in western France after police shot a young man dead, highlighting the simmering tensions between youths and security forces in deprived urban areas.

Rioters set fire to cars and a medical center in the city on Tuesday night after news spread that an officer had shot dead the 22-year-old, named by local newspaper Ouest France as Bubakar, after stopping his car over an infraction. Youths clashed with police in the northwestern neighborhood of Breil where the killing took place, lobbing Molotov cocktails, before the unrest spread to two other poorer districts with a history of gang violence. Burned-out cars littered the streets on Wednesday morning.

The French government called for calm to ease tensions between police and the young protesters. Interior Minister Gerard Collomb condemned the violence, adding, "All the necessary resources are being mobilized" to "calm the situation and prevent any further incidents," as reported by Agence France-Presse (AFP). Local police chief Jean-Christophe Bertrand said the youth had hit a policeman with his car, lightly injuring him, after a squad stopped the vehicle at around 8:30 pm for an alleged infraction and tried to take him to the police station for identification. "One of his colleagues then fired, hitting the young man who unfortunately died," Bertrand told reporters. He was hit in the carotid artery and declared dead on arrival at hospital, police sources said. Judicial police and a national watchdog that investigates claims of police wrongdoing are investigating to clarify "the facts and determine in what circumstances the policeman used his weapon," said Pierre Sennes, public prosecutor for Nantes.

French police have a long history of strained relations with young people in poor, immigrant-heavy suburbs, not least since the death of two teenagers who were electrocuted while hiding from officers, sparking nationwide riots in 2005. The assault of a young black man by police, which led to officers being charged, including for rape after a truncheon was shoved up the youth's anus, sparked fresh unrest last year. In January, the government vowed a crackdown on urban violence after shocking video footage emerged of a policewoman being beaten by a crowd of youths in the Paris suburbs on New Year's Eve.

Recalling the Amien riots during the time of former President Nicolas Sarkozy, a wave of civil unrest has occurred in Parisian suburbs where police intervened to quell unrest. The gang of youths attacked police officers with firearms and buckshot, and the cost of the violent protests runs into millions to repair the damage caused by urban youth.

Breil, the Nantes neighborhood where the young man was shot dead Tuesday, is a socially mixed district home to a large housing estate with a history of gang violence. Police boosted their presence in the area after a series of violent incidents on June 28. Malakoff and Dervallieres, the other neighborhoods hit by riots on Tuesday, have been plagued by drugs and poverty for years. They fall into a category of problem neighborhoods that are to receive extra police help from next September under reforms by President Emmanuel Macron.