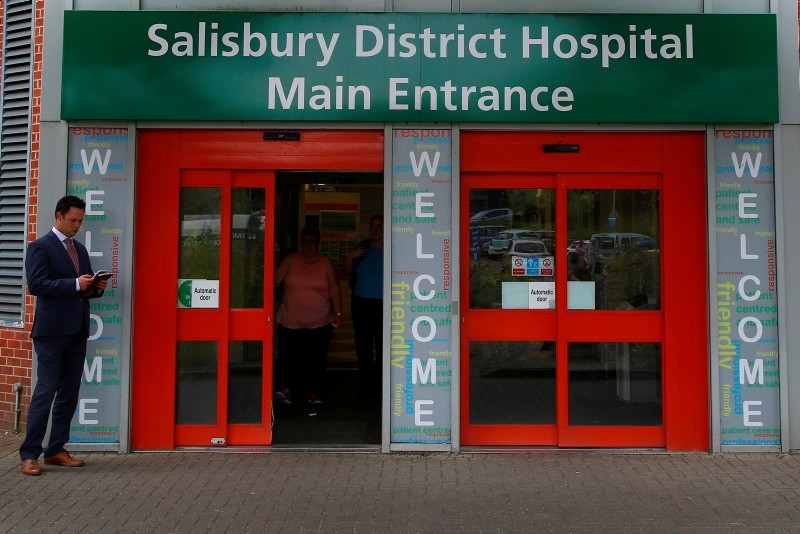 A general view shows the main entrance to Salisbury District Hospital in Salisbury, southern England, on July 4, 2018. (AFP Photo)
by Compiled from Wire Services
Jul 05, 2018 12:00 am

Britain's security minister called on Russia to give details about the Novichok nerve agent attack on a former double agent and his daughter after two British citizens were poisoned with the same substance.

The two Britons are critically ill after what is thought to be a chance encounter with the poison after the March attack on former Russian agent Sergei Skripal and his daughter Yulia in Salisbury in March.

Britain has accused Russia of the poisoning of the Skripals, a charge Russia has repeatedly denied.

"The Russian state could put this 'wrong' right, they could tell us what happened, what they did and fill in some of the significant gaps that we are trying to pursue," Security Minister Ben Wallace told BBC radio on Thursday.

"They (Russia) are the ones who could fill in all the clues to keep people safe."

The man and woman are critically ill in England's Salisbury District Hospital, where Skripal and his daughter were previously treated.

"We don't want to jump to conclusions but if it is established that the Russian state is entirely responsible for this as well, then of course we will be considering what further action we can take," Javid later told parliament.

Javid said scientists at Britain's defense research lab are certain "this is the exact same nerve agent from the Novichok family" as the one that poisoned Sergei and Yulia Skripal in March. He said "we cannot attribute this to the same batch at this point" but scientists are investigating.

Detectives are investigating whether the latest victims were exposed to Novichok left over from the Skripal poisoning, possibly in a Salisbury park.

Javid said "it's completely unacceptable" for British parks "to be dumping grounds for poison."

"To see two more people exposed to the Novichok in the UK is obviously deeply disturbing, and the police I know will be leaving no stone unturned in their investigation," May said on a visit to German Chancellor Angela Merkel in Berlin.

Meanwhile, a Russian lawmaker has described the second case of poisoning with the nerve agent Novichok in southern England as part of British efforts to tarnish the Russia-hosted World Cup and fuel tensions ahead of a planned U.S.-Russian summit.

Sergei Zheleznyak, a member of the parliament's foreign affairs committee, said the poisoning is "a continuation of an anti-Russian PR hysteria that British authorities are trying to create."

Zheleznyak noted that "this is happening amid a quite strong positive emotional wave from British fans who came to Russia to support their team during the World Cup."

He added that a positive perception of Russia ran contrary to the official narrative and blamed British authorities for presenting what could have been a drug overdose as another Novichok poisoning.

The Russian foreign ministry said Thursday the British government should apologies after London demanded Moscow explain itself regarding the latest case of exposure to a nerve agent.

"I am sure that for everything that Theresa May's government has stirred up, this government and its representatives will have to apologize to Russia and the international community," foreign ministry spokeswoman Maria Zakharova told reporters.

The unexplained poisoning has raised public health concerns in the Salisbury area, where a massive decontamination effort took place after the Skripals were found to have been poisoned with Novichok.

Officials still say the risk to the general public is low.

Local police declared the case a "major incident" Wednesday, four days after the couple — identified by friends as 44-year-old Dawn Sturgess and 45-year-old Charlie Rowley — were found collapsed at a residential building in Amesbury, eight miles (13 kilometers) from Salisbury, where the Skripals were poisoned.

Some buildings have been cordoned off as authorities try to piece together the movements of the couple.

Police said the victims are British citizens and live in the area.