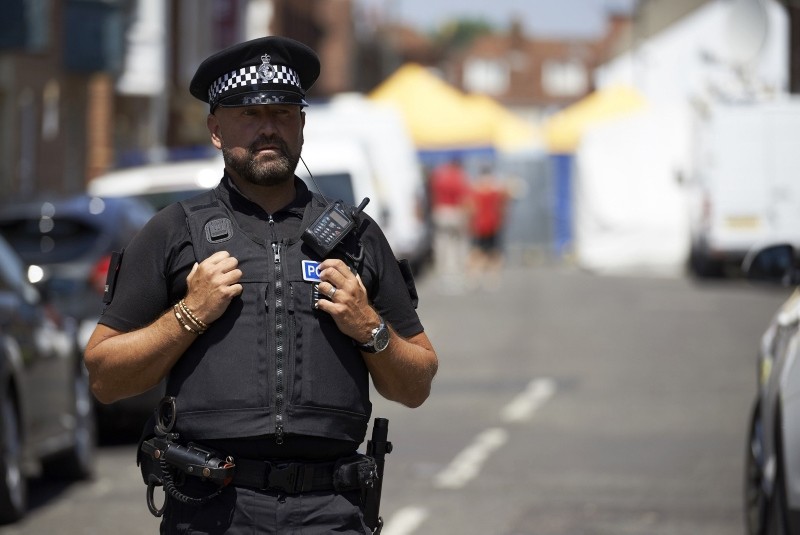 Police officers stands guard at a cordon near Rollestone Street, outside the John Baker House Sanctuary Supported Living in Salisbury, southern England, on July 7, 2018. (AFP Photo)
by Compiled from Wire Services
Jul 07, 2018 12:00 am

A police officer is being treated at a hospital in the southern British town of Salisbury over concerns of potential exposure to the nerve agent Novichok, sources said on Saturday.

The hospital the officer is being treated is near the town of Amesbury, where a British couple were found to have been poisoned last Saturday, reported the Press Association.

Wiltshire Police, to which the officer is thought to be a part of, had "declared a major incident" on Tuesday night after the man and woman, both in their 40s, were found unconscious at a house.

British forensic investigators are continuing to search for the source of the lethal nerve agent.

Officials think Dawn Sturgess and Charley Rowley were exposed to the same chemical weapon used in the March attack on a Russian ex-spy and his daughter.

Sergei and Yulia Skripal were poisoned in southwest England not far from where Sturgess and Rowley live.

Police have said they are looking for a vial that may contain Novichok, a nerve agent made in the Soviet Union during the Cold War.

Officials have said the search underway Saturday could take weeks or months. It has brought more than 100 officers to Salisbury and Amesbury as suspect sites are condoned off to protect the public.