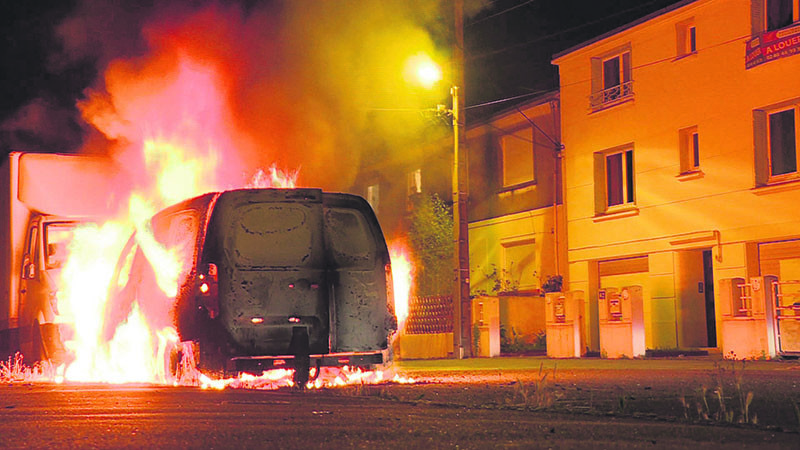 Violent protests have been ongoing in France's western city of Nantes, poor suburb with a large immigrant population, as tensions between police and youth continue

Cars and buildings were set alight Friday in a third night of rioting in western France over the fatal police shooting of a young man. The recent police killing of a young man in northern France reveals young people in troubled French suburbs often have a tense relationship with security forces.

A policeman has been held for questioning over the killing of the man identified by local media as Aboubakar F., an incident that risks inflaming strained relations in France's deprived urban areas where residents frequently complain of police brutality.

Around 50 cars were torched overnight in Nantes and there were arson attempts on a high school and a petrol station, the fire service said, but no injuries were reported.

There have been more than a dozen arrests over the riots, including one in the Paris suburb of Garges-les-Gonesse where the slain 22-year-old grew up, after youths threw Molotov cocktails at police and set dumpsters alight early Thursday.

On Thursday evening, around 1,000 people marched in Nantes calling for "justice for Abou" and demanding that the circumstances of his death be revealed. Prime Minister Edouard Philippe, on a visit to Nantes, condemned the riots and promised "the fullest transparency" about the man's death. Interior Minister Gerard Collomb said the government would do everything in its power "to calm the situation... it is our duty to restore calm to Nantes, as we wish to do countrywide."

The unrest has again highlighted tensions in deprived urban areas of France where local youths often complain about police brutality but security forces are frequently treated as targets. In a separate development, two off-duty officers, a husband and wife, were on Wednesday night attacked in front of their three-year-old daughter in a northeastern suburb of Paris shortly after leaving a dinner party. A police source said the attackers recognized the policewoman because she had recently stopped them for an ID check in the crime-ridden area of Aulnay-sous-Bois. President Emmanuel Macron denounced the attack as an "appalling and cowardly act" and vowed the suspects would be "found and punished." One of them has been arrested while the second remains on the run.

Breil, the Nantes neighborhood where the young man was shot dead Tuesday, is a socially mixed district home to a large housing estate with a history of gang violence. Police boosted their presence in the area after a series of violent incidents on June 28. Malakoff and Dervallieres, the other neighborhoods hit by riots on Tuesday, have been plagued by drugs and poverty for years. They fall into a category of problem neighborhoods that are to receive extra police help from next September under reforms by President Emmanuel Macron.

French police have a long history of strained relations with young people in poor, immigrant-heavy suburbs. In January, the government vowed a crackdown on urban violence after a shocking video emerged of a policewoman being beaten by a crowd in the Paris suburbs on New Year's Eve. Back in 2005, two teenagers of African origin were electrocuted while hiding from officers in the Paris suburb of Clichy-sous-Bois, sparking nationwide riots. Anger over heavy-handed policing bubbled over again last year when a young black man in another Paris suburb suffered severe anal injuries during his arrest which were caused by a truncheon.