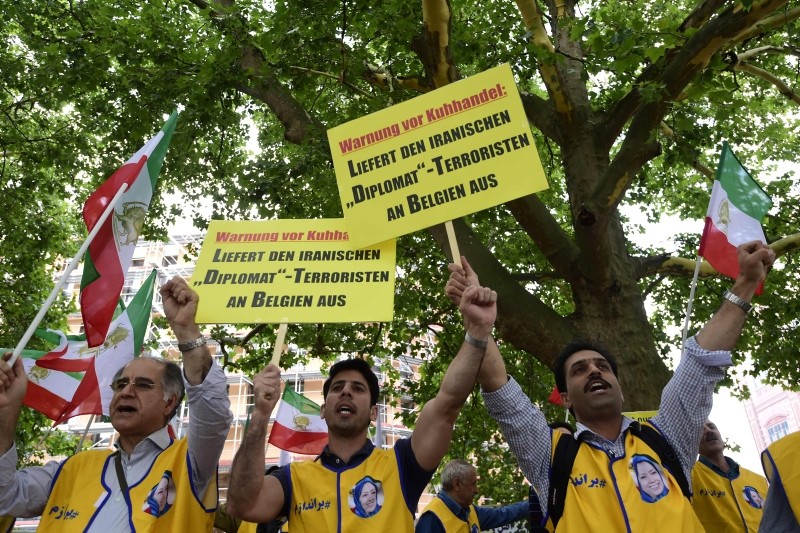 Activists hold placards reading 'Deliver the Iranian diplomat - terrorist to Belgium' during a demo calling for the extradition of a secret service officer to Belgium in front of the Federal Foreign Office in Berlin on July 11, 2018. (AFP Photo)
by Compiled from Wire Services
Jul 11, 2018 12:00 am

An Iranian diplomat suspected of involvement in a bomb plot against an Iranian opposition rally in France, was charged in Germany on Wednesday with activity as a foreign agent and conspiracy to commit murder.

Assadollah Assadi, a Vienna-based diplomat, is suspected of contracting a couple in Belgium to attack an annual meeting of an exiled Iranian opposition group in Villepinte, near Paris, German federal prosecutors said.

He allegedly gave the Antwerp-based couple a device containing 500 grams of the explosive TATP during a meeting in Luxembourg in late June, prosecutors said in a written statement.

Assadi was detained earlier this month near the German city of Aschaffenburg on a European warrant after the couple with Iranian roots was stopped in Belgium and authorities reported finding powerful explosives in their car.

According to German state prosecutors in Karlsruhe, Assadi had been accredited since 2014 to the Iranian embassy in Vienna, working for Iran's MOIS intelligence agency, which monitors opposition groups in the country and abroad.

The fact that his status as a diplomat applies only in Austria facilitated his arrest in Germany on the basis of a European arrest warrant issued by Belgium.

Assadi faces charges of espionage and conspiracy to murder under German law, but the prosecutors said the German investigations would not obstruct an application for extradition to Belgium.

On July 4, diplomats from Belgium, France and Germany were summoned by Iranian officials in Tehran to hear that the diplomat detained in Germany was not involved in the foiled attack on French soil.

Iranian Deputy Foreign Minister Abbas Araghkhi told the ambassadors of Belgium and France and the executive secretary of the German embassy that the diplomat should be released immediately.

Iranian Foreign Minister Javad Zarif has called the allegations of a foiled terrorist plot a ploy.

The Mujahedeen-e-Khalq group (MEK) is an exiled Iranian opposition group based largely in Paris and Albania. The formerly armed group was removed from European Union and U.S. terrorism lists several years ago after denouncing violence and getting western politicians to lobby on its behalf.