Trump's visit to Britain tests historic relationship between US, UK 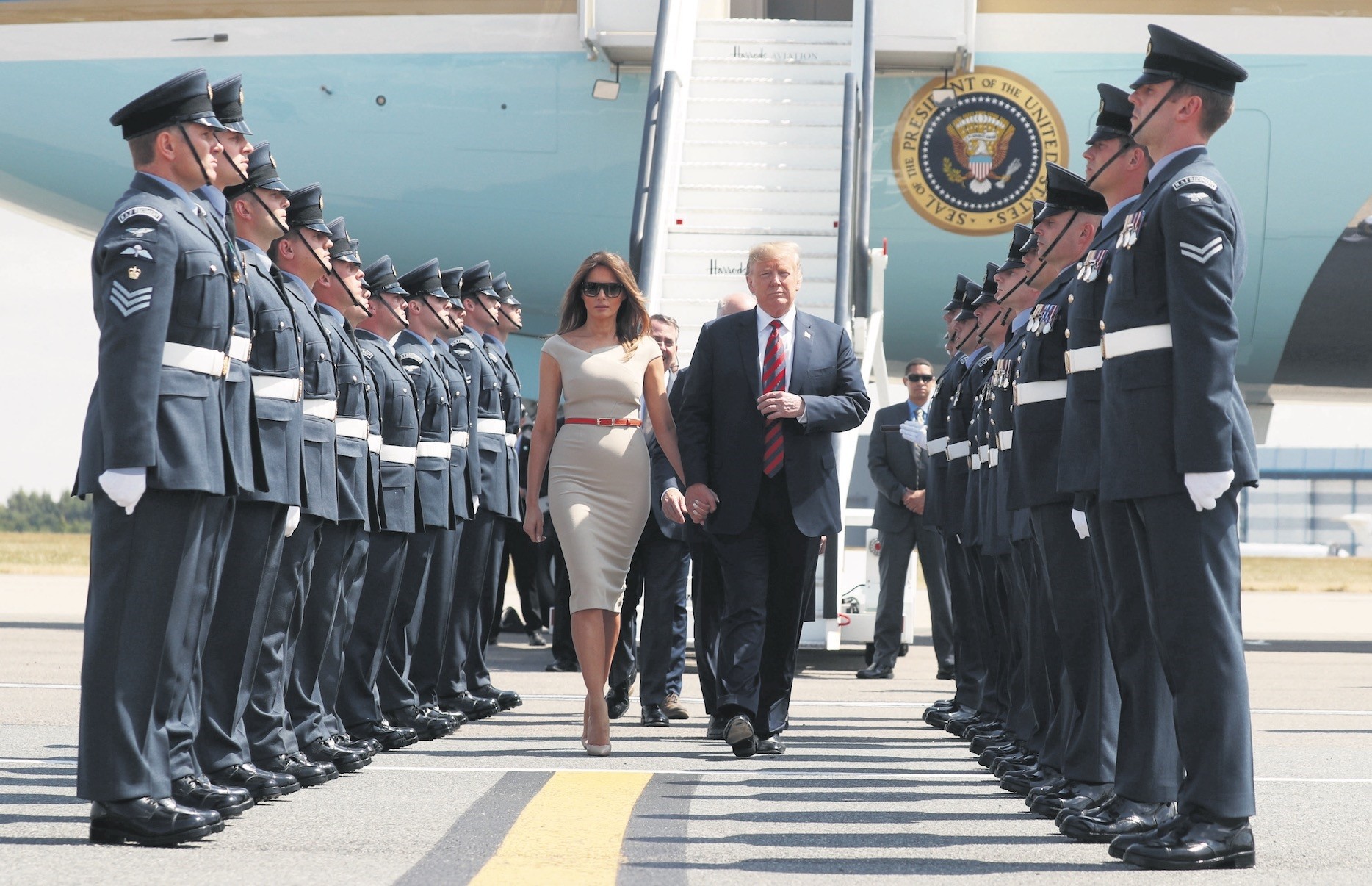 After a series of diplomatic spats that have deteriorated the historic relationship between the U.S. and the U.K., Donald Trump arrived in Britain for his first visit as U.S. president, landing amid a whirlwind of protests against him

Donald Trump began a protest-laden trip to Britain yesterday by questioning whether Prime Minister Theresa May would deliver on U.K. voters' intentions when they decided to quit the European Union. Ignoring all diplomatic niceties, the convention-shredding U.S. president set up the four-day visit with a rebuke of his beleaguered host as she battles to stop her government falling apart over Brexit.

Shrugging off the plans for mass protests, which include a giant baby-shaped blimp bearing Trump's features, he said in Brussels: "They like me a lot in the U.K. I think they agree with me on immigration."

"I think that's why Brexit happened," he told a news conference before flying to Stansted Airport north of London. He said Britain was "a pretty hot spot right now with a lot of resignations." "The people voted to break it up [Britain's ties with the EU]," Trump said.

"So I would imagine that's what they will do, but maybe they will take a little bit of a different route. I don't know [if] that is what they voted for," he added. "I'd like to see them be able to work it out so it could go quickly."

Trump is doing his best to avoid the mass protests planned for his controversial trip, which will include talks with May, tea with Queen Elizabeth II and a private weekend in Scotland. Some 77 percent of Britons have an unfavorable view of Trump, according to a poll of 1,648 respondents by YouGov. The poll conducted this week said that 63 percent found Trump racist and that 74 percent said he was sexist.

When British Prime Minister May became the first world leader to visit Donald Trump at the White House in January 2017, it appeared the special relationship between the two transatlantic allies was in good health. But a series of spats have driven the two leaders apart, creating tensions ahead of Trump's four-day visit to Britain, which began yesterday.

The U.S. president's brash style and hardline "America First" policies have caused consternation across Britain's political spectrum and society. He was severely criticized last November, including by May, after sharing three inflammatory anti-Muslim videos posted by far-right group Britain First. His criticism of Britain's anti-terror policies after a series of attacks in 2017 also did not go down well.

At the beginning of this year, Trump said he was not coming to inaugurate the new U.S. Embassy building with a tweet, calling its new site in south London an "off location." "I am not a big fan of the Obama Administration having sold perhaps the best located and finest embassy in London for 'peanuts'," he wrote, adding: "Bad deal. Wanted me to cut ribbon – NO!"

In May, Trump told a National Rifle Association (NRA) convention that a "once very prestigious hospital" in London was like a "war zone" because of knife crime. "Yes, that's right, they don't have guns, they have knives and instead there's blood all over the floors of this hospital. They say it's as bad as a military war zone hospital." He then mimicked someone using a knife. Knife-related crimes rose by 23 percent in London last year.