Italy refuses to take in boat with 450 migrants, tells them to 'go to Malta' 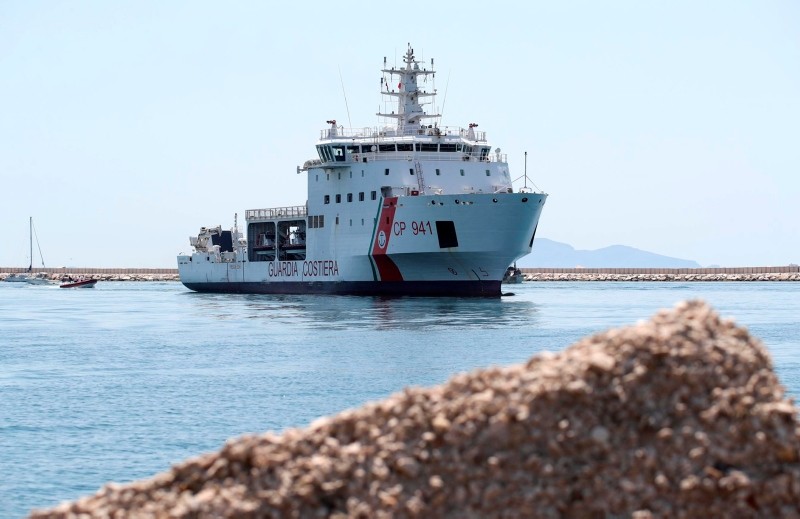 The Diciotti ship of the Italian Coast Guard, with 67 migrants on board rescued 4 days ago by the Vos Thalassa freighter, enters the Sicilian port of Trapani, southern Italy, Thursday, July 12, 2018. (ANSA via AP)
by Associated Press Jul 14, 2018 12:00 am

Italy and Malta squabbled Friday over who was responsible for rescuing 450 migrants crowded aboard a fishing boat in the Mediterranean as the vessel, apparently not seeking help, headed toward a tiny island off Sicily.

Italian Transport Minister Danilo Toninelli had tweeted that Malta was obliged under maritime law to rescue the migrants since they were in the Maltese search-and-rescue area earlier on Friday and also provide the fishing boat with safe harbor.

But Malta retorted that when Rome's maritime rescue coordination center informed it about the vessel, the boat was already far closer to the tiny Sicilian island of Lampedusa than it was to Maltese shores. The Maltese interior ministry also said that persons aboard the vessel announced their intention to proceed to Lampedusa.

"This boat cannot, must not arrive," Salvini tweeted. "We already have given, you understand." Salvini was apparently referring to the costs that Italy has incurred in the last few years caring for some 600,000 migrants who were rescued at sea and brought to Italian shores.

On Thursday, Salvini was thwarted thanks to Italian presidential intervention in his determination that 67 migrants rescued earlier in the week by an Italian tug in the waters off Libya not set foot in Italy. The tug's captain had told the Italian coast guard that the migrants were threatening the crew after it appeared that the tug would turn them over to the Libyan coast guard.

The Italian coast guard vessel Diciotti arrived in the port of Trapani, in western Sicily, on Thursday, but the migrants were kept aboard while Salvini vowed that "delinquents" among the migrants would be jailed, then expelled, leaving it unclear for hours if the other passengers would be allowed off to seek asylum.

Salvini insists that the Libyan coast guard deal with migrants in waters off the largely lawless North African country. But U.N. officials and human rights advocates say migrants are at risk for torture, beatings, rape and other atrocities in Libyan detention centers.

Two African migrants were escorted off the Diciotti Thursday night by Italian police. The other migrants, including young children and women then came down the gangway to be taken to a center for identification.

Salvini had said a Sudanese and a Ghanaian among the migrants allegedly tried to hijack the tug so it wouldn't return them to Libya.

Italian media quoted Trapani Prosecutor Alfredo Morvillo as saying the investigation would be carried out without bowing to any political pressures. No arrests were immediately made.

In an interview with Italian radio station RTL on Friday, Salvini insisted that no more "fake refugees" would arrive, referring to the large percentage of migrants who see their asylum bid fail.

The Italian news agency ANSA quoted a social worker for UNICEF, the U.N. children's advocacy agency, and the aid group InterSos as saying the migrants recounted several minutes of "great confusion and fear." Sahar Ibrahim was also quoted as saying that migrants said they were ready to dive into the sea to avoid being sent back to Libya.