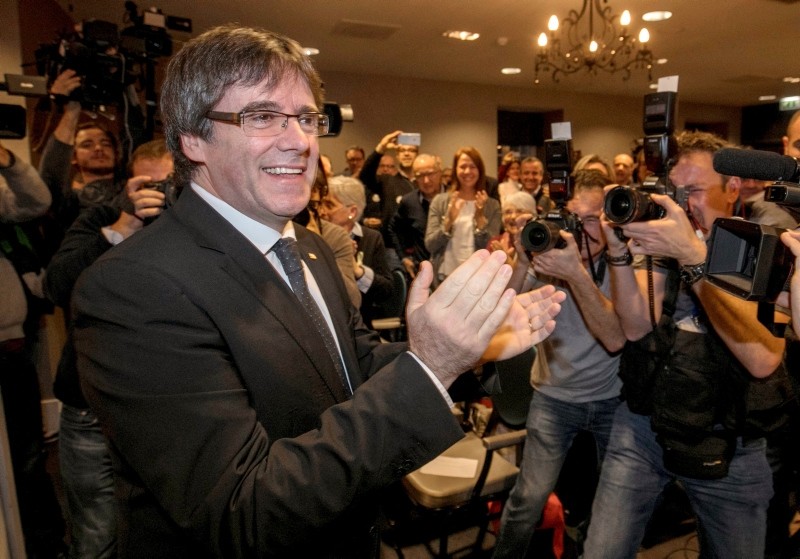 In this Saturday, Nov. 25, 2017 file photo, ousted Catalan president Carles Puigdemont attends a presentation of the candidate list for the Catalan regional elections in Oostkamp, Belgium. (AP Photo)
by Compiled from Wire Services
Jul 19, 2018 12:00 am

A Spanish judge on Thursday dropped European and international arrest warrants for deposed Catalan president Carles Puigdemont and other separatist leaders who fled abroad, the Supreme Court said, the second time he has done so.

In a court ruling, Pablo Llarena said he had taken the decision after a German court agreed to extradite Puigdemont, but only for misuse of public funds and not on the more serious charge of rebellion.

Puigdemont fled to Belgium after an Oct. 1 referendum to avoid arrest and then eventually traveled to Germany, where he was taken into custody in March.

Judge Pablo Llarena said in a decision published Thursday that he's revoking the international arrest warrants against the six separatists, in what the Catalan movement was likely to regard as a major victory against Spain's central authorities.

Rebellion carries a maximum sentence of 30 years in prison in Spain, while misuse of public funds is a lesser charge that carries up to 12 years.

The charges are in connection with the Catalan regional government's unauthorized referendum last year on independence from Spain and a subsequent unilateral declaration of independence by the separatist-controlled regional parliament.

The German court last week said it would allow Puigdemont's extradition on charges of embezzlement. But it said that the Spanish charge of rebellion is not recognized in Germany and that related German statutes such as that against treason did not apply, because Puigdemont's actions "did not rise to this kind of violence."

Llarena was scathing about the German court's decision, describing it as "a lack of commitment" in pursuing the fugitives.

If Puigdemont and the others were extradited only on charges of embezzlement, they would only be able to stand trial in Spain on those charges.

Llarena wants Puigdemont and his separatist allies who also fled the country to face charges of rebellion and sedition, as well as misuse of public funds.

If the six separatists return to Spain voluntarily, they would still face rebellion and sedition charges.