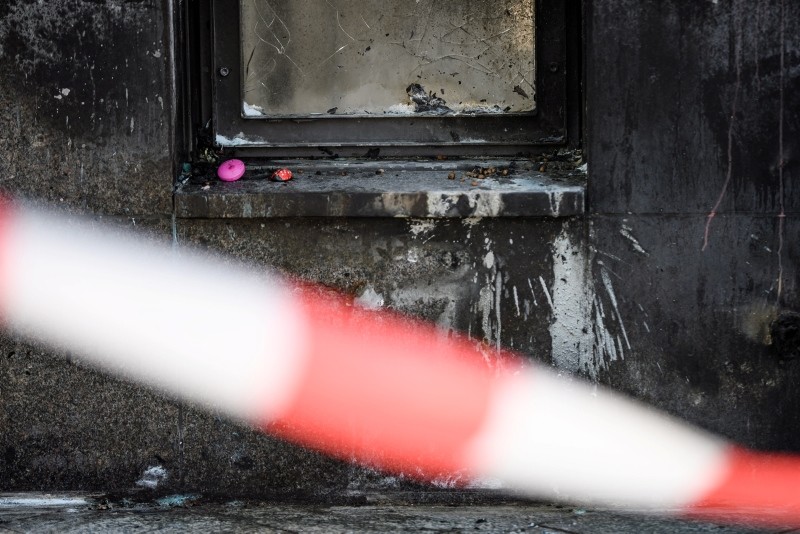 A police cordon is placed in front of the scene of the crime, where two homeless persons were set on fire near the suburban railway station 'Schoeneweide' in Berlin, Germany, 23 July 2018. (EPA Photo)
by German Press Agency - DPA
Jul 23, 2018 12:00 am

Two homeless men who sustained severe burns after an unknown individual doused them with a flammable liquid and set them on fire at a Berlin train station are in critical condition, a police spokesman said on Monday.

The men, German citizens aged 47 and 62, were taken to hospital after the attack, which occurred at the Schoeneweide train station in south-eastern Berlin around 11 pm (2100 GMT) on Sunday. The men's belongings were also set on fire.

Police declined on Monday to confirm reports by German newspapers Bild and Berliner Zeitung that passers-by came to the scene and put the fire out with a fire extinguisher retrieved from a nearby fast-food stand.

The motive for the attack remained unclear, though authorities have launched an investigation on the suspicion of attempted murder.

Police have so far been unable to question the victims due to the severity of their injuries, a spokesman said.

Some 150 people took part in a vigil in Berlin to raise awareness about the attack.

A protester placed a sign reading "Grief - Anger - Solidarity" at the site of the attack, and others placed flowers and candles on the ground. One person collected money for homeless people.

Police said the vigil, attended mostly by young residents of the area and other homeless people, remained peaceful.

The incident calls to mind another arson attack on a sleeping homeless man in Berlin in December 2016 that made headlines across Germany.

A group of young men tried to set the man on fire at the city's Schoenleinstrasse train station on Christmas Eve, but passengers prevented the man from sustaining any injuries.