Support for far-right among Brits grows after May's Brexit plan 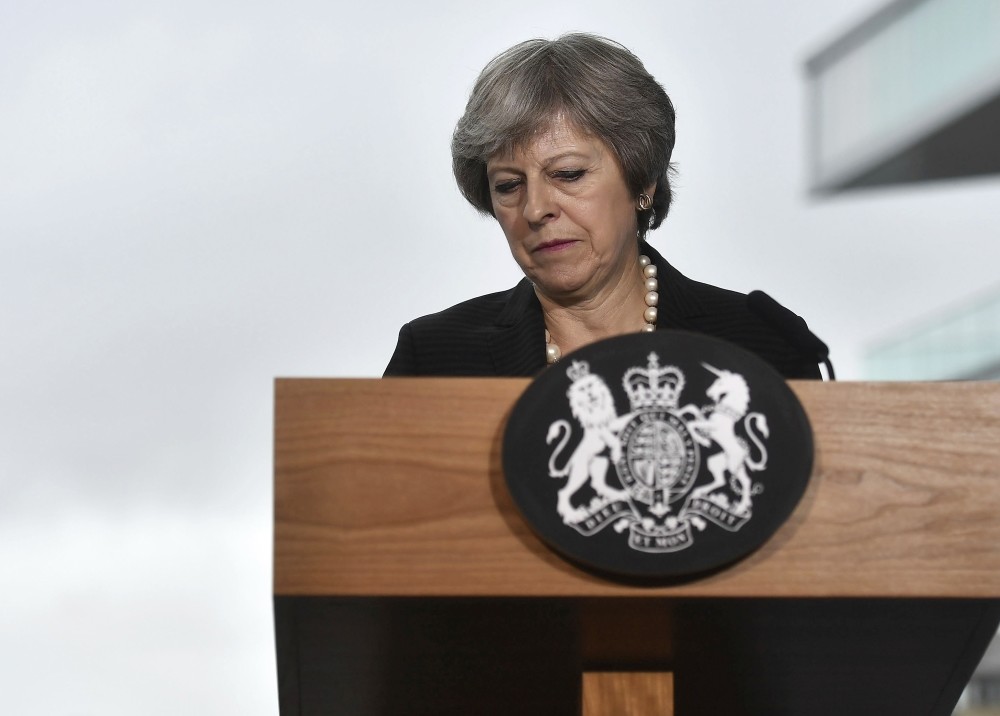 British Prime Minister Theresa May gives a speech at Waterfront Hall, Belfast, July 20.
by Compiled from Wire Services
Jul 24, 2018 12:00 am

Prime Minister Theresa May's plans to leave the European Union are overwhelmingly opposed by the British public and more than a third of voters would support a new right-wing political party committed to quitting the bloc, according to a new poll.

May's political vulnerability was exposed by the survey which found voters would prefer Boris Johnson, who quit as Britain's foreign minister two weeks ago, to negotiate with the EU and lead the Conservative Party into the next election.

Only 16 percent of voters say May is handling Brexit well, compared to 34 percent who say that Johnson would do a better job, according to the poll conducted by YouGov for The Sunday Times newspaper.

With a little more than eight months to go before Britain is due to leave the EU on March 29, 2019, May's government, parliament, the public and businesses remain deeply divided over what form Brexit should take. May's plans to keep a close trading relationship with the EU on goods thrust her government into crisis this month after two of her most senior ministers, including Johnson, resigned over the plans. May's government published a white paper earlier this month with long-awaited proposals for Britain's relations with the EU after it leaves the bloc, seeking to keep it in a free market for goods with the EU while having a more distant relationship for services.

Embattled PM May found little sympathy last week from the European Union's 27 other nations in her quest for more flexibility in Brexit talks, as the time to negotiate an amicable divorce between Britain and the EU dwindles down. The EU has long complained that May has delayed the Brexit negotiations because internal bickering within her Conservative Party has brought her government to the brink of chaos. Britain and the EU need to agree upon a divorce plan this fall so the EU Parliament and legislatures in EU nations can approve it before Britain leaves.

Almost half think it would be bad for Britain. The survey also found voters are increasingly polarized, with growing numbers of people alienated from the two main political parties. Thirty eight percent of people would vote for a new right-wing party that is committed to Brexit, while almost a quarter of the public would support an explicitly far-right anti-immigrant, anti-Islam party, the poll found.

Brexit campaigner Nigel Farage and U.S. President Donald Trump's former adviser Steve Bannon are in discussions about a forming a new right-wing movement, according to The Sunday Times.

Half of voters would support remaining in the EU if there was a second referendum, the poll found, a level of support found in other surveys this year. YouGov spoke to 1,668 adults in Britain on July 19 and 20, according to The Sunday Times, which did not provide other details about how the poll was conducted.