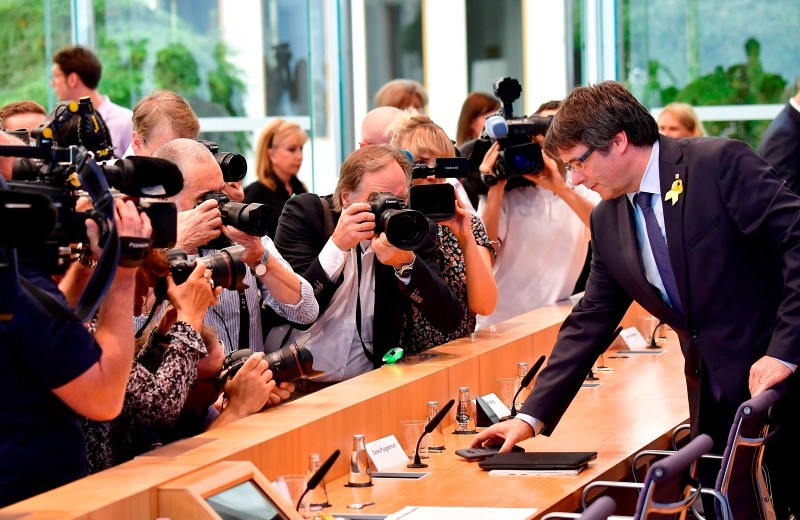 Catalonia's deposed president Carles Puigdemont arrives to give a press conference on July 25, 2018 in Berlin. (AFP Photo)
by Compiled from Wire Services Jul 25, 2018 12:00 am

Exiled Catalan separatist leader Carles Puigdemont plans to leave Germany by the weekend and return to Belgium, he told a press conference on Wednesday.

"This weekend I will return to Belgium," the separatist leader told a news conference in Berlin, adding his "political activity will be based in Belgium".

Sacked as Catalan president after a failed secession bid on October 27, Puigdemont fled to Brussels several days later as did several members of his executive who had also been deposed.

There, he settled in Waterloo before being arrested in Germany at the end of March on his return from a trip to Finland.

Puigdemont's decision to return to Belgium comes after Germany brought to an end extradition proceedings against him this month after the Spanish authorities dropped their request to have him returned to Spain.

Madrid had demanded Puigdemont's extradition from Germany, where he has lived since March.

From Belgium, Puigdemont will be able to travel where he wants, save Spain where he is still wanted for rebellion, which carries up to 25 years in jail, and misuse of public funds.

In theory, he could remain in self-exile for 20 years, which in Spain's legal system is the time limit after which the rebellion charge is no longer valid.