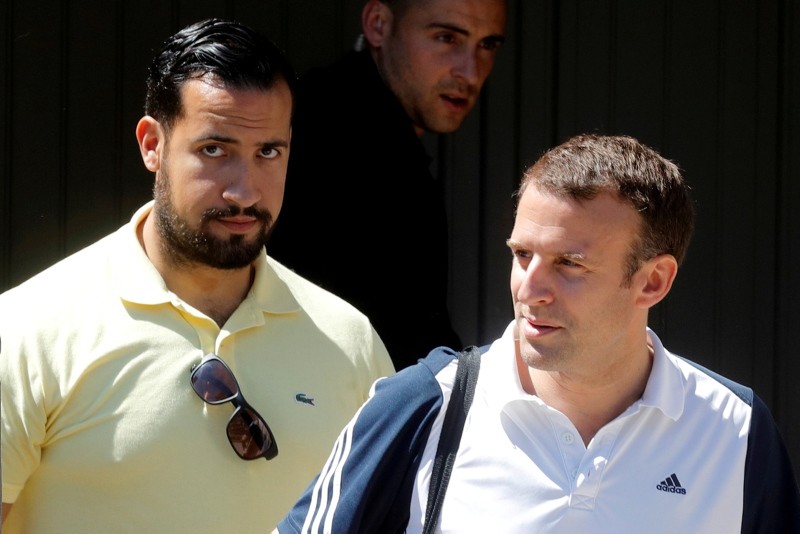 The former security aide to President Emmanuel Macron who triggered an uproar after a video showed him beating a protester acknowledged a "huge mistake" in attending the demonstration equipped as a police officer, but described it as a political error that ended up backfiring against the French leader.

Authorities have opened a judicial investigation into Alexandre Benalla, who was fired last week, and his office was searched on Wednesday. Le Monde newspaper published the interview Thursday with Benalla, who had shaved his beard to be less recognizable.

Macron's office has been criticized for not disclosing the accusations weeks ago and the way it handled them. The French leader said Tuesday at a private gathering of his centrist party that he alone was responsible. He has not spoken publicly to lawmakers during a week of televised parliamentary sessions, but when pressed by journalists on Wednesday he downplayed the uproar over Benalla's actions.

"He made a real, serious error which I felt was a personal betrayal and told him so. He was punished for this error and then resumed his work. When he made a second error he was more severely punished, as had been expected," Macron said. "Everyone makes mistakes, the response has to be proportional."

France's parliament has opened up a series of inquiries into Benalla's role within the Macron administration and his request to carry firearms. The 26-year-old claimed credit for choosing the site where Macron formally claimed the presidency — the Louvre palace — and said his job was to take care of Macron's private life. He can be seen in dozens of photos, at Macron's side or just behind him.

Benalla said targeting him has been a means to hurt Macron. "I am the weak link," he said.

Meanwhile, Macron on Thursday dismissed the scandal surrounding his top security aide who roughed up protesters as a "storm in a teacup," as furious criticism from his opponents showed no sign of abating.

The centrist president sought to downplay the affair on Thursday.

"I've said what I had to say, which is that I think it's a storm in a teacup," he told AFP on a visit to the village of Campan in southwest France.

Christian Jacob of the rightwing Republicans, who like many opponents has charged Macron with displaying arrogance in his response, accused the president of "monarchical leanings".

"We're facing a very serious incident -- the president must explain himself before the people, he cannot do it with the disdain and provocation with which he has done so thus far," Jacob told Franceinfo radio.

Opposition lawmakers have repeatedly called on Macron to address the nation over the affair.

On Wednesday, he accused his opponents of "disproportionate actions", adding he remained proud to have hired former bouncer Benalla as he was a "devoted" employee who had "taken an unusual path" professionally.

Two parliamentary committees have been grilling top Macron aides, with the president's chief of staff Alexis Kohler the latest to take the stand before the Senate on Thursday.

Kohler acknowledged that officials' initial decision to punish Benalla with a two-week suspension may "appear insufficient" but at the time it seemed "proportionate".

Macron's office director Patrick Strzoda told lawmakers Tuesday that he decided there were not enough elements to justify turning Benalla over to prosecutors, not least because no criminal complaint had been filed against him.

The opposition Republicans are set to file a vote of confidence in the government on Friday -- a largely symbolic move, since Macron's centrists hold a strong majority in parliament.

Macron's approval ratings, already low, appear to have taken a further hit from the scandal, with a record 60 percent reporting an unfavorable opinion of him in an Ipsos poll published Tuesday.

Along with Benalla, Vincent Crase, an LREM security agent who was also at the scene, has also been charged over the affair, as have three police officers accused of giving Benalla surveillance footage so he could mount a defence.