European security must no longer depend on US, France's Macron says 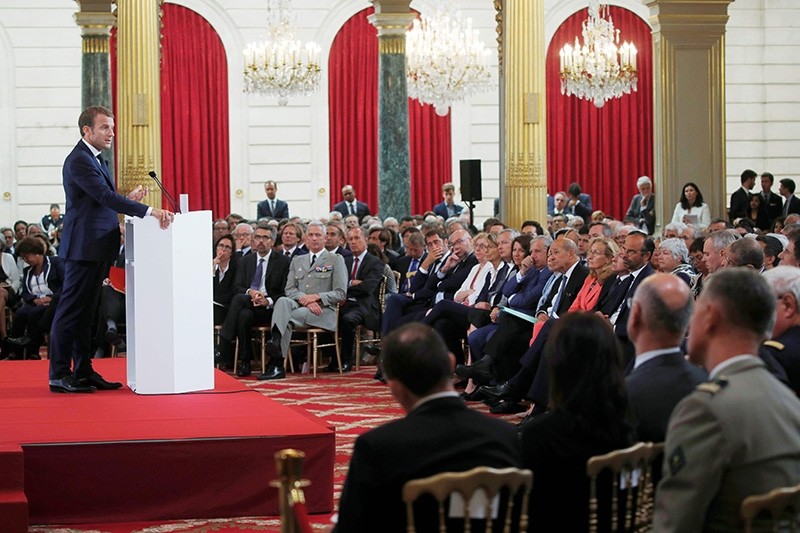 French President Emmanuel Macron delivers a speech during the annual French ambassadors' conference at the Elysee Palace in Paris on Aug. 27, 2018. (AFP Photo)
by Daily Sabah with AP Aug 27, 2018 12:00 am

French President Emmanuel Macron on Monday announced a new push for a European defense project, saying continent's security should not rely on the United States.

Macron made the remarks at the annual French ambassadors' conference at the Elysee Palace in Paris.

Macron said "it's up to us" to guarantee Europe's security and therefore its sovereignty.

He said discussions on defense cooperation should include all European countries and Russia, on condition progress is made with Moscow on Ukraine.

Macron also called for trade discussions to be held between the U.S., Europe, China and Japan in November in Paris.

He proposed to organize a meeting on the issue on the margins of World War One commemorations on Nov. 11 in Paris, since he has invited dozens of world leaders to the event including U.S. President Donald Trump, who said he would come.

"I think we can build a fairer and more efficient system. I think we should not give in to one's hegemony and everyone's division", Macron said in a reference to Trump's trade policies to impose tariffs on countries like China.