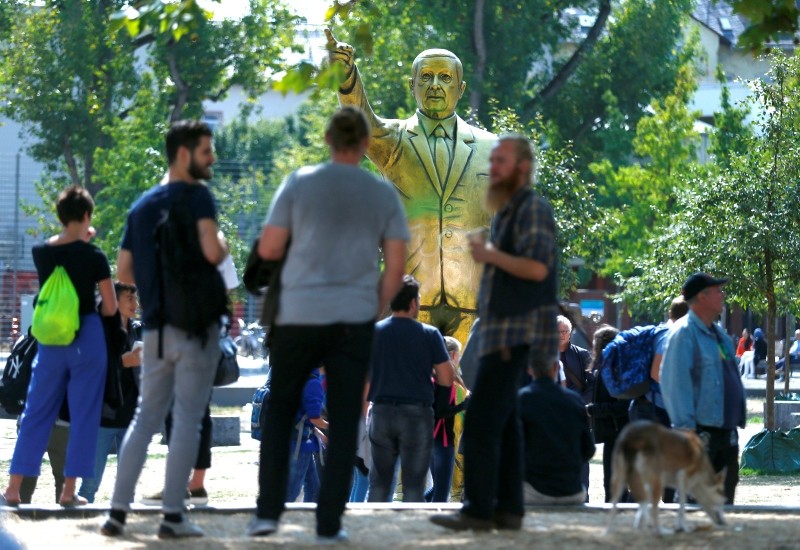 A 4-meter-high golden statue of President Recep Tayyip Erdoğan erected as part of an art installation in the German city of Wiesbaden has been removed after police were not able to provide security for it.

The city had decided to take down the installation, which was a part of the Wiesbaden Biennale for contemporary art, because its security could "no longer be guaranteed," local authorities said on Twitter late Tuesday.

On Tuesday evening, supporters and opponents of Erdoğan gathered in the central square where the statue was erected and engaged in verbal altercations. A police spokesman said there had been an "aggressive atmosphere" but said there was no violence.

The incident comes one month ahead of a state visit by Erdoğan to Berlin. Germany is also home to a large Turkish community.

Police tweeted a video of the statue - which had been covered in expletive-laden graffiti during its brief time on display - being removed by a fire truck in the early hours of Wednesday.

Some of the profanity on the statue was already removed by a resident, who did not want the situation to escalate.

Its erection in the center of the city on Monday had left many residents baffled.

"We have received calls from a string of confused citizens - it is not clear to people that it is part of the Biennale," a spokeswoman told dpa earlier, adding that the installation had been erected without the knowledge of city officials.

A "humanlike statue" had been approved before the art festival, but officials had not been told that it would be a statue of Erdoğan.

A Turkish-origin Wiesbaden resident told German daily Allgemeine Zeitung on Tuesday that the move was tactless and badly timed given that at least 20 people were injured during a far-right protest in the eastern city of Chemnitz.

"Tonight terrible things happened in Chemnitz, the more incomprehensible it is that such an action is being carried out at this time," the person who asked to remain anonymous said.

Uwe Eric Laufenberg, artistic director of Wiesbaden's state theater, defended the installation as an example of free speech. "We erected the statue in order to discuss Erdoğan," he said.

"Art is there to reflect reality," he said. While it might not be easy to understand, he said, "in a democracy all opinions have to be tolerated."

The city had initially resisted intervening over the statue, officials said, so long as law and order was not affected. Authorities also insisted they respected the constitutional right to artistic freedom.

According to the regional daily Wiesbadener Kurier, the Turkish Consul General in Frankfurt also called the town hall to get more information about the statue.

"He wanted to know that was happening in Wiesbaden. He is a little worried because Erdoğan is coming to Germany soon," said Head Mayor Sven Gerich.

The theme of this year's Biennale, which began on Thursday and ends on Sunday, is "Bad News."