France's 'president of the rich' Macron unveils $9.3B anti-poverty plan 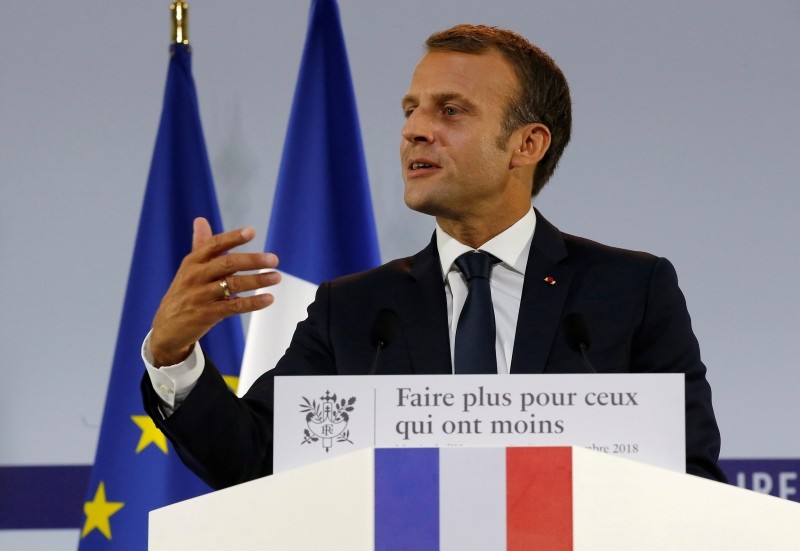 French President Emmanuel Macron on Thursday unveiled an 8 billion-euro ($9.3 billion) anti-poverty plan focused on getting people into work and helping the young.

With his popularity slumping, the former investment banker wants to convince voters that his reform agenda does not only benefit the wealthy. Opponents have dubbed him a "president of the rich," a tag that has hurt his image.

The president announced compulsory school or vocational training until the age of 18, extra crèche places to help mothers return to work, more emergency accommodation with a priority for women and children, and breakfast at school for primary school students in the poorest areas.

"I don't want a plan that leaves the poor living in poverty, only more comfortably," Macron said in a speech at the Museum of Mankind in Paris.

Nearly 9 million people in France - a third of them children - live in poverty, defined as 60 percent of the median income. That is equivalent to 14 percent of the population.

Macron also promised reform of the social benefits system, after causing a stir in June when he said that although France continued to "plough a wad of cash" into benefits, people remained poor.

He said he would simplify a system that is so complex that one in three people without an income and eligible for core benefits do not apply.

Macron's opponents and left-wing voters paint the 40-year-old as a Thatcherite-in-disguise who talks down the poor.

His poll ratings have tumbled since his election victory in May 2017 and he is less popular than his three predecessors at the same stage of his presidential term.

Some critics were swift to point out the gap between the 8 billion euros promised for the anti-poverty plan over four years and the 20 billion the rich will gain in the same period from the scrapping of the wealth tax.

Sambou Coucoure hopes to be one beneficiary of Macron's anti-poverty drive. The former technician quit his job 10 years ago because of back pain. Depression caused his wife to stop working as a care worker, leaving them dependent on benefits worth 1,300 euros a month.

Since March, the couple and their three children have lived in emergency accommodation, two six-meter-square hotel rooms with a sink and microwave.

"We have to buy takeout food because we can't cook," 50-year-old Sambou said. "We never thought it would come to this for our family. As a French citizen, I can't see why we live in conditions like these."